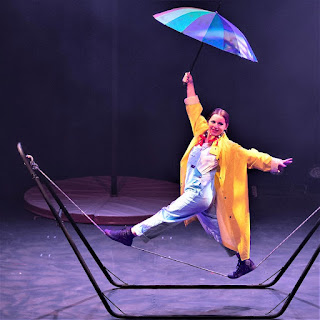 It is always a great pleasure to see young performers playing out their craft with commitment, enthusiasm and skill. This past week I have been vastly impressed by the quality of performance from Canberra Youth Theatre’s young ensemble in Jena Prince’s production of Kate Walder’s  Soul Trading, a cautionary sci-fi tale of a not too distant future where communication is virtually limited to between humans and their robots.

At the Street Theatre young circus performers from Warehouse Circus demonstrate their talents in juggling, acrobatics, aerial feats and clowning to name but a few of the adroit circus skills that visiting, internationally acclaimed  director Idris Stanbury  has introduced to Warehouse’s show Elemental.  Each act is in some way or other inspired by the Australian climate and the effect of the seasons on the landscape and lives of the people.

Four comically dressed clowns introduce the show with their watering cans, a symbol of growth.  In an original and ingenious warming up of the audience, they cast out seeds of clapping, cheering, ooh-aahing accompanied by a watering can Mexican wave that set the tone for an entertaining and engaging evening of circus fun and amazement. Dealing with climate and climate change is a juggling act as the four gnomes fling their juggling clubs in a skilful display of intense concentration. Dexterous juggling feats by a trio with juggling balls that magically circled and entwined like eddies of wind currents also captured a sense of changing climate patterns. Cast members tumbled like spinifex across the stage or scurried like animals of the bush to escape the flame red danger of the approaching bushfire. Billowing blue cloth traversed the stage as the warning of flood enveloped the land.  And gymnasts clambered up the cloth and the poles to escape the rising flood. Every circus act revealed the impact of the seasons from the ravaging fires to the sweeping floodwaters , the air-filled snow and the solid earth. 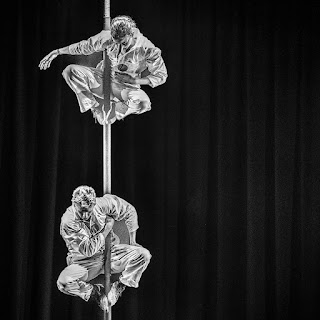 Each section is accompanied by songs that echo the seasonal movements and the accompanying circus acts from Burt Bacharach’s Raindrops Keep Falling on My Head to Otis Redding’s Sitting On The Dock of the Bay, the BeeGees Staying Alive, Billy Joel’s  We didn’t start the fire and Dean Martin’s Let It Snow. There is a funny mimed performance of Let It Go from Frozen. Director Stanbury has created a show ideal for all ages from this grandfather to his three entranced grandsons as they gazed in wonder and delight at the physical skills of people their own age. Of course, not every act goes perfectly. A juggling club might fall. The tightrope walker might lose her balance for an instant and another may find it difficult to stand on the balancer’s thighs without a gentle support from an helpful gnome. Even the nifty hat juggler with his splendid tricky routine with the sliding hat might have missed the mark a couple of times. A very stylish hula hooper gracefully recaptured her mesmerised audience. These are the risks in the circus game. What is so commendable is that every performer dealt with the slip-up professionally and resumed the routine with poise and flair. After all, every audience likes a mistake, as long as they get to see perfection in motion during the act.

In Warehouse Circus’s   finale it was only fitting that the seeds planted and watered at the start of the show should grow to full height as trees  of three loomed before our eyes in a forest of trusting, collaborative circus performers who enthralled their capacity audience of family and friends.   Some may one day cease to be circus performer and take with them the wonderful life skills that they have learnt into their adult lives. Some may become professional circus performers and live a life of entertaining others with their awesome skills. Whatever the case, performers and audience alike at Soul Trading and Elemental  will have had an evening of entertainment  filled with laughter and thoughtful contemplation about a possible future and the effect of climate change.