There’s a great sense of fun about Bell Shakespeare’s ‘The Comedy of Errors’ right after the prologue, which makes you think it’s going to be a tragedy.  This 1970s disco-type production of Shakespeare’s shortest play is delightful.

An old man, Egeon, laments the loss of his two sets of twins and their twin servants.  Separately they turn up in Ephesus on the same day and chaos reigns as various members of the town begin to doubt their sanity when they encounter the different twins.  All is sorted out, of course, and everyone is reunited, giving us a happy ending.

It has been given a production of great colour, John Travolta-type white suits and throbbing disco music.  The palm trees and neon give it a holiday feel.  It has been cleverly designed by Hugh O’Connor.  In keeping with the era, the cast cavort through the play mostly with carefree ease but just like the era, there are rumblings of trouble. 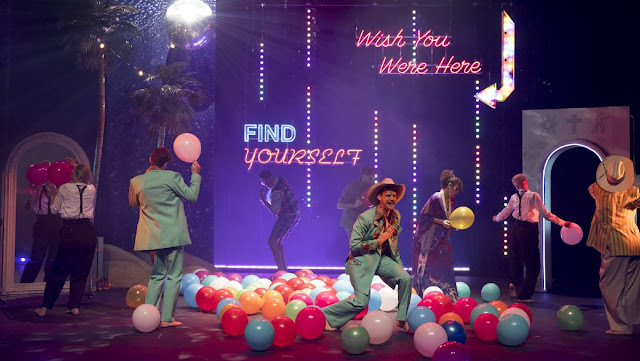 The ensemble cast play their roles well.  The fashionable gender-swapping doesn’t matter here and gives the play a few more laughs with Luciana becoming a rather campish Luciano, played by Joseph ‘Wunujaka’ Althouse..  There is good work from the two sets of twins.  Skyler Ellis has more to do than Felix Jozeps as the two Antipholus twins and Julia Billington and Ella Price really register as the two non-binary Dromios.

Director, Janine Watson, deftly keeps the fun and story moving swiftly.  This high energy production is true to its source and there is a surprising depth to the characters.

At the end, it is quite touching when we see the pain that the old man has gone through when he reunites with his wife and children.  It might be a carefree era, but not everyone has been happy.

This is a fun farce, made even more palatable by the disco-ish setting.  If you are unfamiliar with the play, you would benefit from reading the synopsis before it starts so that you have the characters clearly in mind.  Bell Shakespeare, with productions such as this, seems to think you know the play as well as they do.

Anyway, this production is a lot of fun.  They even have lots of balloons!