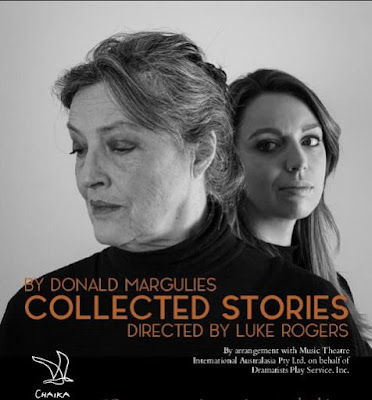 Chaika Theatre at the ACTHub, Kingston to 12 November

When is a person's life events suitable for another to use in their own creative process?  That is the question posed in Donald Margulies’ play, ‘Collected Stories’.  It is also an unflinching look at honour, trust, friendship, perceived betrayal and plagiarism set in the literary world of New York in the early 90s.

Lisa Morrison, a student played by Natasha Vickery, attends a tutorial in 1992 in the home of Ruth, her lecturer and respected short story writer, played by Karen Vickery.  Very aware initially of Ruth’s reputation, Lisa strikes up a close teacher-mentor-friend relationship with Ruth which is viewed over the next six years.  In that time, Ruth tells of a long-ago love affair which Lisa uses, without telling Ruth, as the basis of her first novel.

Unlike in the movie, ‘All About Eve’, there is no overt treachery here.  Lisa retains her friendship and respect for Ruth and believes she has a right to use the deeply personal story Ruth has told her in an unguarded moment.  Lisa cannot understand that she has caused Ruth a deep and lasting hurt.

A brilliant character study of these two women, it delves deep into the relationship of teacher and student, looking at friendship and whether confidences shared are fair game in the literary world.  It poses the ethical question – is a story told still owned by the teller?

This two-handed play offers great roles for two women.  At the start of the play, we see Ruth in control as the teacher - tough, worldly-wise and intimidating to a student in awe of her literary achievements.  Lisa, the student is nervous and unsure of herself and eager to please.  They couldn’t be more different.  As the years progress, Ruth drops her guard.  Lisa becomes more confident, publishing a set of short stories and thinking about moving on to writing a novel.


As Ruth, Karen Vickery gives a performance of great skill – tough, intelligent, with moments of unexpected warmth, hints of loneliness and past regrets.  There is never a moment when she does not convince.  Natasha Vickery as Lisa, also gives a very strong performance.  She has the challenge of introducing subtle changes as Lisa matures over the years, hinting at past emotional damage and she is completely successful.  Both women live their characters to a very realistic degree.
Very well-directed by Luke Rogers, on a set that convincingly evokes New York and Ruth’s literary life-style, the story is compelling and told with humour as well as being dramatic.

Watching these two top performers playing it is a treat in itself.

Posted by Canberra Critics Circle at 9:19 AM