THE TIME OF ROSES 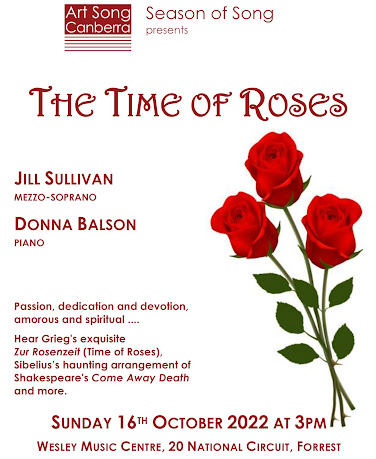 Think of roses and their romantic scent the scent and it’s no wonder composers wrote so many songs focussing on this flower.  In ‘The Time Of Roses’, Art Song Canberra’s latest concert, mezzo-soprano, Jill Sullivan, and pianist, Donna Balson, presented a range of songs and music celebrating roses and romance by composers such as Beethoven, Schubert, Wagner, Grieg, Mahler, Sibelius and Mendelssohn.

Jill Sullivan, mezzo-soprano, has performed throughout Australia in opera and concert.  She has performed with Opera Australia, the West Australian Opera and the Queensland Opera.  She has an extensive concert, chamber and recital repertoire.

Donna Balson, pianist, worked in Germany for 25 years.  She now teaches at the Sydney Conservatorium of Music.  She has also performed as a singer internationally.

The program began with ‘Adelaide’ by Beethoven.  Sullivan’s rich mezzo-soprano was notable for its power and clarity as well as her clear diction.  She gave a fine performance of this song, bringing out an appealing rapturous sensitivity.

Other songs by Schubert and Brahms followed but the highlight of this first half of the concert was two of the Wesendonck Lieder by Richard Wagner, ‘In the Hothouse’ and ‘Dreams’.  They displayed the power of her voice and her interpretation of the songs with their emotional range was thrilling.

Donna Balson played the ‘Fantasia in E major – The Last Rose of Summer’.  It was a fine performance, bringing out the loneliness and reflectiveness of the work.

The highlights of the second part of the concert were Grieg’s ‘I Love But Thee’, two songs by Richard Strauss, ‘Red Roses’ and ‘The Roseband’, and the Sibelius setting of Shakespeare’s ‘Come Away Death’.  All of them were an excellent showcase for Sullivan’s rich and powerful voice.  Donna Balson’s accompaniment was assured throughout.

Both performers gave down to earth information about the songs and piano works played.  It was a memorable concert by these two fine artists.