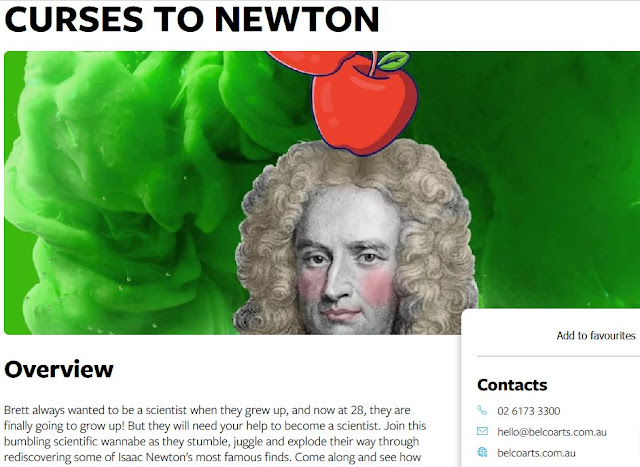 
The arts, science and emotional intelligence come together in Brett Hoppenbrouwer’s presentation of Isaac Newton’s First, Second and Third Laws of Motion, especially suited for middle school ages. Brett is a non-binary and neurodivergent science communicator and circus artist with a background in molecular biology.

Brett takes on a role as a young person in the most untidy room you can imagine, full of balls, tubes, - all sorts of surprising paraphenalia.  They invent experiments as they juggle (very skilfully), and phone their Mum excitedly about what they’ve discovered about why things fall, why some things don’t, and how some things go in opposite directions from each other.  Children (and one parent) from the audience help them with doing experiments and explaining what’s happening.

Each time they talk to their mother, she tells them that Newton’s already explained the particular law of motion, and politely says “Don’t forget to clean up your room.”

After the third time Newton has beaten them to it, they feel angry and sad.  They ring their cheerful Dad who commiserates, and reminds them what their Mum will say.  In this mood, Brett turns to the children for advice about dealing with difficult feelings.  After several suggestions today, including “eat some food”, one boy explained what he knew about managing emotions.  Brett calms themself for a final juggling performance, and a great demonstration of what happens when you blow (with a powerful fan) a spinning toilet roll at the audience: like portside streamers.

As I saw it, Curses to Newton is more about an education in attitudes to life than imparting details of the Laws of Motion.  The show encourages the enjoyment of experimenting and inventing – science in practice – as well as teaching resilience and positivity rather than a sense of failure in the face of competition.

It must be the least ‘slick’ show I’ve ever seen – but that’s its strength.  The children,  and their parents (and grandparents) are with Brett as they try so hard – and after all, all the ‘experiments’ actually worked!

During a short break from research to figure out what they wanted from a career in STEM, Brett fell into a job as a balloon twister and clown, followed by another as a science party host and school show presenter, and another as half of the comedy juggling duo Passing Out. Enjoying all of these more than being cooped in a lab, they completed a Certificate IV in Circus Arts and a Master of Science Communication Outreach before continuing to work as, what they like to call, a science clown.

In Canberra, Brett developed the show through a mentorship with the well-known children’s music entertainer, Jim Sharrock (Lucky Jim https://www.luckyjim.com.au ) in a residency at Belco Arts, following training with You Are Here, a Canberra based, independent arts organisation. “We exist to provide Canberra artists with the resources and environment to develop, investigate, and be ambitious with their practice. We are focused on art that cares for the artists who make it, and the audience who experiences it.” (https://www.youareherecanberra.com.au/) 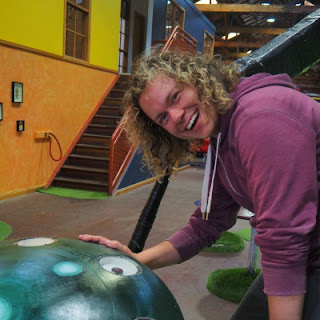