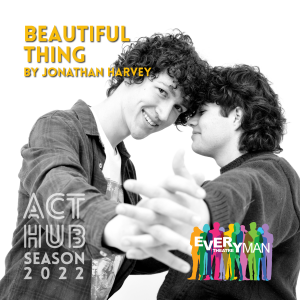 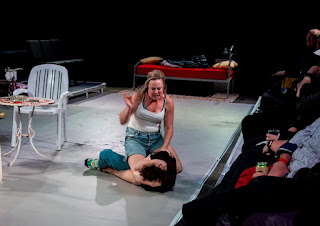 Beautiful Thing is a beautifully, tender and heartwarming story about young gay love by Jonathan Harvey, beautifully directed by Jarrad West and played with such sensitivity and truthfulness by Everyman’s superb company of actors. It is yet another glittering jewel in the crown of ACTHUB’s  programme.

Sandra (Amy Kowalczuk) is a single Mum struggling to raise her fifteen year old son on a South London Council estate.   She works as a barmaid while harbouring a dream of one day running her own pub. Jamie (Nick Dyball), feeling the neglect, is an habitual truant, bullied at school  and resentful of his mother’s ever-changing lovers, including Tony (Colin Giles), a weed smoking neo-hippie who introduces  Jamie to dope and gives acid to Leah (Liv Boddington), the sassy Mama Cass obsessed next door neighbour. On the other side Ste (Liam Prichard) lives with his abusive, alcoholic single Dad. One night, after Ste is cruelly beaten by his father, Sandra invites him to sleep overnight in Jamie’s bed, where a gay relationship develops. Harvey paints an empathetic portrait of characters trapped by social status, economic disadvantage and sexual intolerance, the play’s characters play out a life confined by circumstance and controlled by the legacy of Thatcher austerity. It is the early Nineties and the age of consent for homosexual relationships between consenting males is still 21 years of age. Harvey’s play is an indictment of a society that devalues the worth of the individual and the abiding power of love. Beautiful Thing is a play about love, the love of a mother for a son, the need for love denied, sexual love and the natural love between people irrespective of gender, race, creed or colour.

Director Jared West has produced a play that is at once powerful, moving, uplifting and ultimately redemptive .The production reverberates with authenticity. These are honest people, living out their lives as best they can and grappling with their fears, their frustrations and their desperate need to be loved.  West and Everyman have created a work that will touch the heart of everyone who is fortunate enough to see this not to be missed production.

More than that he has elicited remarkable performances from an outstanding cast. Kowalczuk gives a phenomenal performance as the mother, desperately attempting to do the best for a teenage son, while striving to make a better life for them both. Kowalczuk’s magnetic performance as Sandra defines her as one of Canberra’s finest actors. Nick Dyball’s brooding teenager, rebellious and insecure, naïve and confused by Jamie’s homosexual attraction to Ste is a masterly depiction of adolescence. He is an actor to watch out for with a highly promising future. Liam Prichard presents an intriguing performance of the abused son, fearful, insecure and bewildered by his sexual desire. Colin Giles’ lends a comic element to his sex driven relationship with Sandra and his buffoonish immaturity. It is a relationship unlikely to endure. Liv Boddington is appealing as the girl expelled from school with her only anchor being an obsession with Cass Elliot and her songs that West uses between some of the scenes. Boddington effectively captures the aimlessness of an existence beyond her infatuation with the music of Mama Cass. Her portrayal of a drunken and drugged impersonation of Mama Cass is laden with the pathos of a lost soul.

Jonathan Harvey’s Beautiful Thing is much more than a play about two teenagers being sexually attracted to each other. It is a beautiful testament to survival and to the need to be loved and valued as a human being irrespective of class or status or sexuality. No words are needed as the lights fade on Jamie and Ste and Sandra and Leah to the sound of The Mama’s and the Papas with Mama Cass singing  “Dream A Little Dream of Me”

Everyman’s production  of Beautiful Thing is a rare opportunity to experience the very best there is in theatre at ACT HUB. Funny, tender and true Beautiful Thing will touch your heart and affirm the power of love.