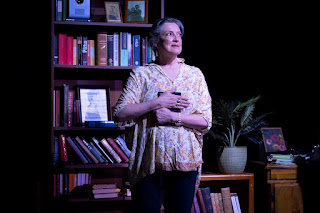 There is something evocative about Gershwin’s Rhapsody in Blue.  Softly seductive, beguilingly entrancing the jazz arrangement draws you in to the New York apartment of famous writer and teacher, Ruth Steiner. In what one might expect from a Neil Simon Comedy, Steiner played by the remarkable Karen Vickery is leaning out of her window to throw the key down to her student Lisa (Natasha Vickery) on the street below. The buzzer doesn’t work, the window is jammed and Steiner hurls her key to the ground below while shouting instructions to Lisa. It is a comical start to a play that seamlessly  unfolds to probe the complex relationship between  teacher and student, authoritative mentor and devoted mentee. Donald Margulies ‘text is a masterclass in playwrighting. The performances by both actors provide a mesmerising master class in acting.

I become totally absorbed in the evolving relationship as impressionable, vulnerable and obsessed Lisa dotes on every word, every critical comment, every piece of advice from her idol’s lips. With insightful skill director Luke Rogers charts a carefully orchestrated and deliberately timed air of ups and downs and twists and turns as two intriguing personalities test the waters of a shift in their relationship. The dynamic between the two women turns and  the relationship shifts from teacher and student to assistant and employer, colleagues and friends before Margulies introduces the crisis that will tear the relationship apart.  Margulies’s insight into the aspirations and frustrations of a writer’s life where the fading star of regret is bitterly outshone by her young protégé’s flaming comet of success is a theatrical tour de force that places Chaika Theatre Company at the pinnacle of Canberra’s professional theatre scene. The audience is lured into a world where writer and actor merge in a performance that is rivetingly true, infuriatingly complicated by the conflicting emotions of mutual admiration on the one hand and destructive misconception on the other. What price success when scarred by insecurity, self doubt and distrust? What hope salvation when confronted by ravaging age and betrayal? What hope of restitution when inspiration is condemned as plagiarism and friendship is discarded as crumpled torn manuscript pages upon the apartment floor. Fragility thy name is ego.Collected Stories unsettles as we see the destructive nature of vulnerability take hold of both women, one past her prime and the other on the precarious precipice of success and adulation. Is Lisa’s purloining of Steiner’s life experience the collected stories that foretell  her fate? Is this the future that every artist faces?

Suffice to say that Collected Stories will allow no passive engagement. The direction is perfectly executed , the writing inescapably real, incisively  observant  and so powerfully encapsulated in the flawless performances of the real life mother and daughter on stage. The chemistry is palpable, the timing instinctively precise and the emotional connection so authentic that we watch each moment unfold as though it is happening in the instant before our very eyes.

Collected Stories is no All About Eve.  Steiner is no Margo Channing  and Lisa no Eve Harrington. Margulies’s dramatic skill is far more nuanced than that. This is a tragic tale of declining years and youthful obsession. And through it all courses the spectre of fear. Karen Vickery’s Steiner is a study of time’s approaching inevitability. Natasha Vickery’s Lisa a puzzling paradox of confused intention. Judge for yourself the true intention of her action. The mirror held to Nature in Collected Stories may not emit the true reflection.

Following on from the earlier inaugural production of Edward Albee’s Three Tall Women, Chaika Theatre Company proves itself to be another shining beacon of hope for the emergence of professional theatre at ACT HUB and Karen Vickery and Natasha Vickery shining lights on a professional  Canberra stage. Support local professional and independent theatre and buy a ticket today. Collected Stories is must see theatre.