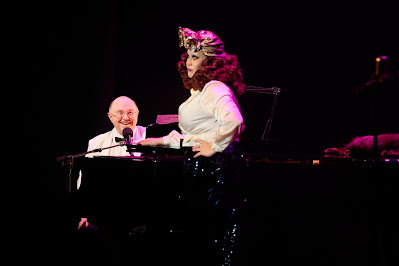 It is New Year’s Eve at the Club Corona in Sydney’s notorious Kings Cross. Torch singer Cath and wizard on the Ivories Phil are about to herald in a New Year. And what a year it will be. Phil has it all planned, a tour to Germany and then across to Japan, ending in Hiroshima, “It will be a blast”

And that is what Phil Scott and Catherine Alcorn’s show is, a witty sometimes corny, sometimes affectionately  sentimental but also  adeliciously irreverent blast from the past. With their Club Corona band comprising Thomas “Slims” Waller on drums, Oscar Peterson on a slim shouldered double bass and Robbie Chenoweth on trumpet the night is all set for a rollicking repertoire of Tin Pan Alley, jazz and Big Band rhythms. And 30 Something certainly delivers. It’s a quirky, wildly eccentric and cheeky homage to a bygone era.

Enter through the tables the distinctive figure of Phil Scott, Club piano player whose nimble fingered leaps along the ivories announce the arrival of the Club chaunteuse, sweeping in with Norma Desmond panache and a touch of Big Momma on the intimate cabaret stage. I immediately sense that the New Year at Club Corona is going to come in with a bang. And it does. Alcorn warns of us a possible police raid.  And she ain’t wrong. Scott keeps the sponsors happy with those unforgettable jingles. It only takes a couple of bars for a woman to call out “We’re happy little vegemites” while lucky quiz contestants  get something special for guessing the name of the town that Scott’s original song alludes to.

But 30 Something is not just corny jokes and  reminiscences. Australia is just coming out of the depression and war has been declared. Times are tough and one has a sense of desperation in Scott’s forlorn wireless adverts and Alcorn’s disillusionment with Howard Hughes’s casting couch as she reminiscently reclines to Phil Collins’s In The Air Tonight. Anachronistic perhaps but poignant none the less. Scott’s rendition of Yip Harburg and Jay Gorney’s Brother, Can You Spare A Dime tears at the heart. Scott and Alcorn are consummate performers, an odd but touching soulsister and brother match made in the down and out club world of King’s Cross. Alcorn is all vamp in one moment and vulnerable victim the next with a powerhouse voice that belts out Putting on the Ritz one moment and later in the show a sentimental thank you for the memory with Scott . From Norma Desmond to Mae West with a serve of Dorothy Parker wit thrown in, Alcorn commands the stage with her talent and her rapport with the audience, while Scott is the undisputed master of wit at the keyboard. Together they are a duo to delight.

Club Corona is more than a Kings Cross Cabaret. It is the symbol of an uneasy age about to descend. It is not all glitter and sparkle and mirror balls. It is two performers keeping their art and hopes alive while the world around is beginning to falter. There is an uncertainty that is apparent in the jokes, the forced repartee and the regret. In spite of this Scott and Alcorn show that talent shines through and friendship prevails. We are left with the hope that their world of cabaret will survive. I would have liked more songs, more glitter and more sparkle. But as the countdown starts and a single lonely balloon falls to the stage I realize that 30 Something with two of Australia’s finest entertainers is more than a glimpse of the cabaret world of 1939. Leave your expectations at home. There is laughter, wit, music and song from the finest, but hold onto your hats. You are in for a surprise. This is cabaret for our time.