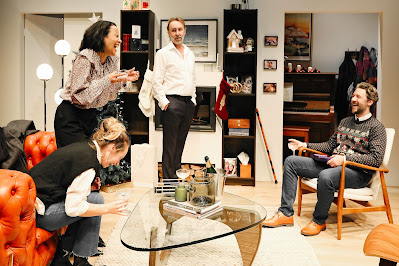 Any new production of an old play makes it a new play.  Each performance – including how its audience responds – is a new experience.  That’s the wonder of live theatre.

Joanna Murray-Smith has adapted Henrik Ibsen’s A Doll’s House placing it in a modern world of unreliable financial security rather than Ibsen’s more compact almost small-town 19th Century local banking system.  To picture the difference, consider that today Australia has only four major banks, while in the 1890s depression more than 50 Australian local banks went bust with managers like Helmer. https://www.rba.gov.au › publications › rdp

Today’s Torvald and his wife Nora are caught in financial wild weather of dubious loan sharks and fragile business reputations, where sexual relationships have implications for personal success.

In this scenario, Nora’s way of coping with marriage, to an emotionally limited Aspergers up-and-hopefully-coming Torvald, not only means three children in eight years but outwardly presenting herself as a show-pony socially, while borrowing secretly (and disastrously) to build her husband – almost another child – into the executive level they both want for the wealth it would bring.

Chantelle Jamieson’s manic performance in Act 1, and the force with which she escapes from this conflicted existence – into an unknown but independent future – is an extraordinary tour-de-force.

This is also where the close-up in-the-round Ensemble Theatre shows its power.  We are in the lounge room with her when Torvald, affectionally but so ironically, calls her his little sparrow.  We feel as she does, that she is trapped in this house, treated as a doll with no real life of her own.  I still thank Hayes Gordon for taking the risk on this Kirribilli boathouse in 1958, and remain so glad that it is still afloat 64 years later.

All the cast, equally with Jamieson, establish their characters definitively, so that the mystery of how they relate to each other over the years before and during the Helmer marriage is bit by bit revealed, and therefore explains why Krogstad does what he does just before the end of the play – and why Nora can make no other decision but to leave.

The adaptation, using modern devices (emails instead of letters in a glass letter-box, for example), has kept the story and most of the dialogue the same as in William Archer's translation of 1889.  That in itself is an amazing commendation of Ibsen’s modernity.

Murray-Smith has shortened the playing-time, leaving out the scenes with the children, the nurse and the maid, and having a short scene-change between the original Acts 1 and 2, with a full interval before Act 3.  I can see the economic reasons for this in our day, but it seemed to me that this made the ending seem to come in too much of a hurry.

The dramatic intensity when Nora finally shuts Torvald up with such an angry – however justified – “No!” works for Jamieson’s frantic character, yet it is different from the quiet, rational, absolutely determined, steely-minded Nora that I have always found in the original script just before she stands up to leave:

HELMER I would gladly work for you day and night, Nora – bear sorrow and want for your sake. But no man sacrifices his honour, even for one he loves.

NORA Millions of women have done so.

HELMER Oh, you think and talk like a silly child.

NORA Very likely. But you neither think nor talk like the man I can share my life with.  When your terror was over – not for what threatened me, but for yourself – when there was nothing more to fear – then it seemed to you as though nothing had happened. I was your lark again, your doll, just as before – whom you would take twice as much care of in future, because she was so weak and fragile.

Helmer becomes pitiable, begging, forever incapable of understanding.  He “sinks into a chair by the door” without our pity. In this production, we were in danger of feeling a bit sorry for him.

But that’s what makes live theatre of such great value.  I have seen the play anew in this production of A Doll’s House, in Joanna Murray-Smith’s adaptation under Mark Kilmurry’s direction.  Definitely not to be missed.