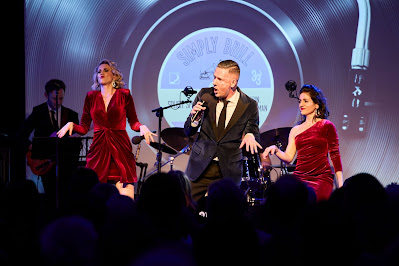 Covid hit the Adelaide Cabaret Festival on opening night. Plans to open with the State Opera of South Australia’s adaptation of Kathy Lette’s witty and devious novel How To Kill Your Husband were thrown into disarray. But the show must go on.  Adelaide’s very own cabaret artists extraordinaire, Michael Griffiths, Amelia Ryan and Michaela Burger stepped up to the mark with Simply Brill – The Women Who Defined Rock ‘n’ Roll. It was a gift made in Cabaret Land.

The scene is set in the famous Brill Building on 1619 Broadway, where the sounds of Tin Pan Alley gave way to the sounds of rock ‘n’ roll and the emergence of a new phenomenon in music history, the singer/songwriter. It is here under the Svengali influence of brilliant impresario, record producer and promoter Donny Kirschner that The Brill came alive with atmosphere and hits came roaring out to the sound of Bobby Darin and Neil Sedaka.  As America and the world changed so too did the sounds of the late Fifties and early Sixties It was magic from the word go and so is the razzle dazzle chutzpah of Griffith, Ryan and Burger. The Banquet Room rocks with the songs of a six year period that went as quickly as it came but left a legacy that would carry on forever through the fading sounds of Tin Pan Alley to the Swinging Sixties and the sexual liberation and most importantly the emergence of female singer/songwriters like Carole King (Will You Still Love Me Tomorrow), Cynthia Weil (Uptown) and Ellie Greenwich (Leader of the Pack) The immortal songs of singer/songwriter couples Carole King and Barry Mann, Cynthia Weill and Gerry Goffin and Ellie Greenwich and Jeff Barry made Kirschner’s Aldon label a household name and launched the careers of singers like King, Weill and Greenwich to this day in tribute concerts, musicals and Simply Brill a show as brill as The Brill itself.

Griffith, Ryan and Burger flesh out the story of The Brill and the three amazing women who launched the sound of a new generation and a changing world. Griffith takes on the role of Kirschner s well as doing a rousing Bill Haley and joining the girls in various numbers. Ryan and Burger take on the three women and the small intimate stage explodes with the energy, gusto and shining talent of Ryan and Burger in homage to King and Weill and Greenwich.  These were the pioneers and the trail-blazers ho paved the way with gold for the women singer/songwriters who came after them. The names of Taylor Swift, Gwen Stefani and Amy Winehouse are blazoned with the memory of the women of The Brill.

Backed by a fabulous foursome on drums (Kyrie Anderson,), Bass (Felicity Freeman), Guitar (Tom Kneebone) and Saxaphone (Emile Ryjoch with a soul stirring solo) Griffith, Ryan and Berger are living proof that the Brill in its short life did more than produce new sounds for a new era and break down barriers for the emerging singer/songwriter luminaries. Simply Brill ios more than a glowing tribute, It’s a nostalgia blast from the past to thrill this Baby Boomer’s heart.

From Putting on the Ritz to Flatter Patter and gibberish (Do Wah Diddy Diddy and Dun-Da-Doo Ron Ron) Simply Brill is Entertainment with an exuberant E, a celebration of the power of women to change the world with their song. Theirs is the songline of a new generation and the Simply Brill performers and musicians rocked the roof of the Festival Centre with a show that proved the perfect opening to Tina Arena’s Cabaret Festival.