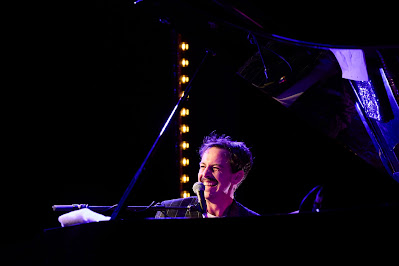 Alone at Last with Brendan Maclean.

From the moment Brendan Maclean’s white teeth flashed their charismatic smile I knew that has his Cabaret Festival show Alone at Last was going to be a highlight. And I wasn’t wrong. I have seen the immensely talented Maclean in Velvet and L’Hotel but this is the first time I have seen his solo act, away from the circus and the ensemble.  Alone at last on the Banquet Room stage of the Adelaide Festival Theatre, Maclean delights his audience with a brilliant repertoire of original songs, covers of artists like George Michael and Lady Gaga and sparkling repartee . With a touch of camp, a lot of panache and a ton of talent, Maclean opens at the piano with George Michael’s Older. It’s an original fiery rendition, thumping out the regrets and letting go. From the very start the piano man is on fire.

Maclean then introduces his own composition, Tectonic in which the long distance relationship shifts and Gravity can pull us down. Tectonic plates tear us apart. Passion pulses through the piano keys and into the song. It is personal, coloured by the voice of experience.. 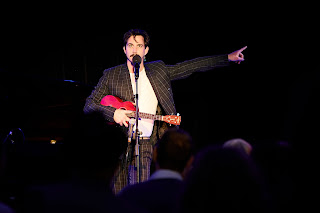 The audience is lapping it up when Maclean changes tempo and instrument to do a stand up segment with the ukulele at the standing mike. Maybe it was the dig at Scott Morrison’s ukulele playing that jinxed the electric uke and Maclean resorted to acoustic accompaniment with  the Bee Gees’ Staying Alive. It was a lucky accident with a far more natural sound, ideal for the intimate Banquet Room. And the stories kept on coming. Tim Minchin gets a serve for his comment about gay men with eyeliner from “ the straight gay man who wears more eyeliner than anyone”. It’s all in good humour with that special Maclean frivolity. Offence is not an option.

For an artist with supernova bright talent, there is a strain of self-deprecation in his account of his encounter with Aria founder Peter Rix and Rix’s compliment “I’m so proud of you” and his response to Cumming’s comment at the Artist;’s Bar , “You’re sexy”. It is impossible not to warm to Maclean’s rapport with his audience as well as his undisputed talent as an entertainer. “Sharing music is beautiful” he tells the audience as he continues to praise covers for the opportunity for invention and imagination. He cites Billie Holiday before launching into Lady Gaga’s Bad Romance. 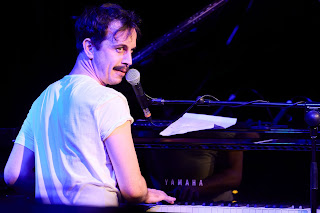 Too soon Maclean brings his solo show to an end with a Leonard Cohen song that isn’t Hallelujah . Chelsea Hotel is dedicated to Janis Joplin. Great songs are about love, its beauty and its pain. Maclean pays homage to the great singers through his cover versions with the distinctive voice and style of a cabaret entertainer with class.

No need to worry. Alone at Last is a golden 5 and Maclean is a star of the cabaret.