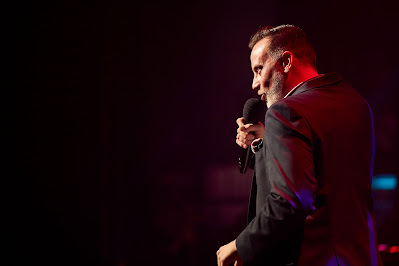 Hayden Tee enters from behind down the aisle of the Dunstan Playhouse singing Michael Jackson’s BAD  “I’m bad”. I’m Baaad. I’m really really bad,”. With a demonic segue he chills with Eartha Kitt’s I wanna be evil.  He hits the final note with threatening glee and a deliciously malevolent jig. . And then the performer’s unexpected confession: “I’m not really bad. I’m really nice” Tee says apologetically.

But nice is not what people have come to see in his cabaret show Bad Guy. “Maybe we should have called it just Guys” Tee says to musical director Nigel Ubrihien at the piano. But there is too much devilish charm in his performance, too much riveting power in his voice and too much to relish at the thrilling evil of his villainy. From Miss Trunchball in Tim Minchin’s Matilda the Musical (The Smell of Rebellion) to the seductive serpent in the Garden of Eden from The Apple Tree (Forbidden Fruit) to South Carolina governor Edward Rutledge in 1776 (Molasses to Rum to Slaves) and the classic villain Javert in Les Miserable Tee is born to play the bad guy. Everybody loves a villain and Tee gives a performance worthy of musical comedy’s nastiest and meanest, cruelest and crudest. And there are few characters meaner and nastier than Ursula from Disney’s A Little Mermaid . Tee raises hackles down the spine with his thoroughly sinister rendition of Pat Carroll’s Poor Unfortunate Souls. 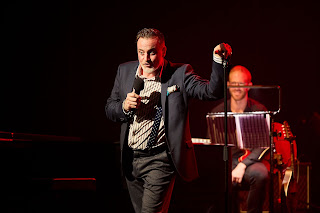 Tee’s Bad Guy is more than a grippingly performed selection of classic songs of villainy. In a surprise twist, Tee, a passionate campaigner for LBGTQI+ people and a fervent advocate of human rights posits the question  “What is good? What is bad? Is it really only a matter of perspective?” Bad Guy becomes a platform for introspection. A proud descendant of the Maori people of the North Island of New Zealand and an openly gay performer, Tee’s compulsion is to confront prejudice and stereotype. We are jolted into another dimension of response. For Tee the evil exists in the subtext. In 1776 Governor Rutledge exposes the hypocrisy of the evil slave trade. Tee reveals the shocking statistic that 40 million people still live in slavery today. Radiohead’s Creep becomes a plea for understanding for anyone who is different and faces the prejudice of a society that regards them as weird. “Worse than bad is apathy” Tee tells his audience before his haunting rendition of I Don’t Care Much from Kander and Webb’s Cabaret. 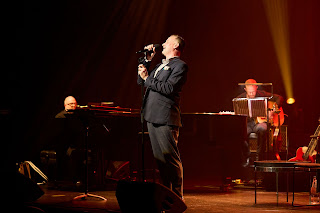 For Tee it is the apathy that destroys the will to combat evil; that makes the uncaring cry So What. Bad Guy  becomes cabaret with a sting. “Say it out loud. Takatapui” Tee calls out. It is the Maori term for the acceptance of homosexuality in societies that still differentiate and oppress those of a different sexuality. Memories of the six year old self who was searching for the truth bring tears to the eyes as he cries out Takatapui to all six year olds who might be struggling with their sexual identity in a world where many are still regarded as bad guys. In the words of The Human Heart from the Broadway production of Once On This Island, Tee’s heartfelt tenor voice offers hope and love and reassurance that all who suffer from the actions and the attitudes of the bad guys are still part of the human heart.

Bad Guy is cabaret of the unexpected. Tee, backed by his excellent band is its Bad Guy conniver, the master of our emotions, the songster with the big Broadway voice that can thrill and ensnare, charm and beguile and finally move to tears. Tee is a titanic talent. Entertaining and enlightening, Bad Guy is cabaret that packs a mighty punch with the power to make a difference.