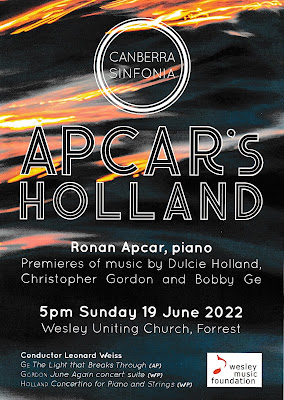 It’s not often that you have a concert showcasing two world premieres and one Australian premiere.  In addition, one of Australia’s most exciting young pianists, Ronan Apcar, was performing and there was even Rowan Phemister on harp as well.  All conducted by Leonard Weiss, this Canberra Sinfonia program at the Wesley Uniting Church, entitled ‘Apcar’s Holland’, proved to be one of their most exciting so far.

The concert began with the Australian premiere of “The Light That Breaks Through”, a 2020 composition by Chinese-American composer, Bobby Ge.  In three movements played continuously, this meditation on nature starts with a three note motif sounding like an improvisation that suddenly expands in unexpected directions.

It was exciting, frenzied, unpredictable, full of atmosphere and very enjoyable.  The playing by Ronan Apcar and the orchestra of this challenging work was excellent and you could see how much Apcar was enjoying playing it.

The second work, “June Again”, a suite of music from Australian composer, Christopher Gordon’s score for the 2020 movie of the same name, was a world premiere.  A movie about a woman’s adventure with family during a temporary reprieve from her dementia, the music is melodic, thoughtful and sunny.  There are undercurrents of tension in the music but also a sense of joy as well.

It was beautifully played by Ronan Apcar and the orchestra with harpist, Rowan Phemister, adding an extra enjoyable dimension with his masterful harp playing.

The final and major work presented was another world premiere.  Australia’s Dulcie Holland composed a number of concert works and wrote music for Government films.  She was well-known for her work with the Australian Music Examination Board as well as writing theory books and technical exercises.

Her “Concertino for Piano & Strings” was composed in 1983, but there is no record of it ever being performed.  She died in 2000.

It was fitting that Ronan Apcar should be the first to perform the work as he is a champion of Holland’s music, having produced a popular recording of her works, “Dulcie Holland Crescent”, in 2021.

The work is in four movements.  It’s a complex work that is nevertheless very accessible.  It has a richness and subtlety with moments of high emotion.  The opening to the second movement with just piano and cello is especially memorable.  Melodic and reflective passages give way to a highly dramatic and grand final movement.  The work is a showcase for a pianist and Ronan Apcar’s performance was superb with great accompaniment from the orchestra.

This review was first published in the Canberra CityNews digital edition of 20 June.

Posted by Canberra Critics Circle at 10:33 AM