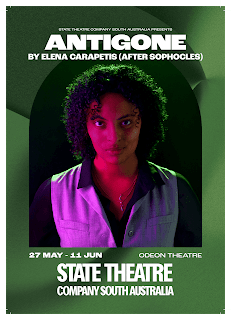 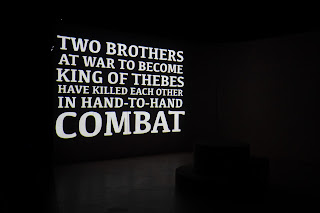 With the passion of youth, the wisdom of experience, the mighty voice of justice and the burning torch of feminism playwright Elena Carapetis’s contemporary adaptation of Sophocles’ Antigone explodes with ferocious relevance and didactic revelation.

Sophocles’ play is introduced with footage of the 1961 film with Irene Papas as the defiant Antigone, determined under threat of death to give her brother Polynices a dignified burial against the order of her king Creon who has proclaimed Polynices a traitor for starting the war. The scene is between Antigone and her sister Ismene who refuses to go against Creon’s command and help Antigone with the burial. This duality lies at the heart of Carapetis’s inspired adaptation.  Antigone’s plight resonates with the fearful horrors of Mariupol, where frantic Ukranians scranmble to retrieve bodies from the rubble to provide dignity in death and a proper burial. Carapetis  catapults Sophocles’ tragedy forward 2000 years. A young girl (Kathryn Adams in a riveting display of childish  indignation and envy) bemoans the fact that she is unable to enjoy the freedom of a brother who has permission to swear as much as he likes, be as dirty as he wishes, revel in sexual pleasure and be given licence to be a young man. The spectre of Antigone’s tragic fate inhabits still the modern day judgement of the Gods, those men who make the laws, decide the social norms and uphold with the powerful influence of stereotype. Carapetis may be presenting a tidal wave of weary clichés, tired assumptions and convenient assertions. Her clichés are real. Her stereotypes are real. The battles may be won but the war rages on. Territory gained is no country claimed.

Her brilliantly constructed argument is played out by three actors who breathe reason and indisputable truths through their committed and magnetic performances, Kidaan Zelleke is the rebellious Antigone, Western civilization’s original feminist, decrying injustice and upholding conviction. In another scene, centred on the debate over gun laws, Zelleke kidnaps a politician (Carapetis, stepping convincingly into the roles of Covid stricken Mark Saturno)) with demands that the politician assassinate panel members at a gun convention. Her brothers had opened fire at her school, killing students and her only option was to revenge inaction and answer violence with violence. The 16 year old girl becomes the victim and the perpetrator of a violent culture. Adams in high heels and a figure-hugging corporate outfit is the conformist, the woman who suffers the exploitation in order to secure her career. Carapetis’s  palette covers a broad canvas, painted with the bold strokes of defiance. Chiara Gabrielli gives an hilarious stand-up comedy performance as television host, a sparkling parody fashioned in the image of male expectation.  Adams gives a remarkable performance of a Disney style princess complete with glittering crown and extravagant costuming. Carapetis’s rollercoaster indictment of society’s attitudes towards and treatment of women hits hard. Sexist statements by Donald Trump and Tony Abbott flash across the screen. Ekkele’s Antigone oppressed by the state voices the names of tyrants through the ages from Genghis Khan to Hitler and from Attila the Hun to Stalin. It is a history, smeared with shame, that demands change. The words of Malala Yousafzai’s father appear on the screen to pronounce the independent strength of his daughter. They are joined by the words of Greta Thunberg, Keke Palmer  and Alexandria Ocasio-Cortez and other women who, like Antigone have stood up against the corrupt power  a male dominated world.

Carapetis switches style with theatrical wizardry, perfectly directed with insight, energy and flair by Anthony Nicola. There is drama, game show, stand up, musical and film. But most importantly Carapetis’s riveting drama reminds us that we continue to live in a patriarchal society where laws and conventions continue to be largely determined by the Creons of our time and every woman continues to endure the suffering of Antigone. Sophocles’ prophetic tragedy of his time is in Carapetis’s dynamic contemporary version a powerful reminder that it is still time for equality to be seen to be done. The statistics on the screen are a reminder of how many men, burdened by expectation and discrimination suicide; how many women are murdered by former partners. Ingeniously written, powerfully performed and directed with mercurial imagination, Carapetis’s Antigone (after Sophocles) is a clarion call to ongoing victories that I hope will tour the nation and be experienced by Canberrans in the not too distant future within the bounds of our Federal Parliament where a new order may continue to fight for Antigone’s cause.