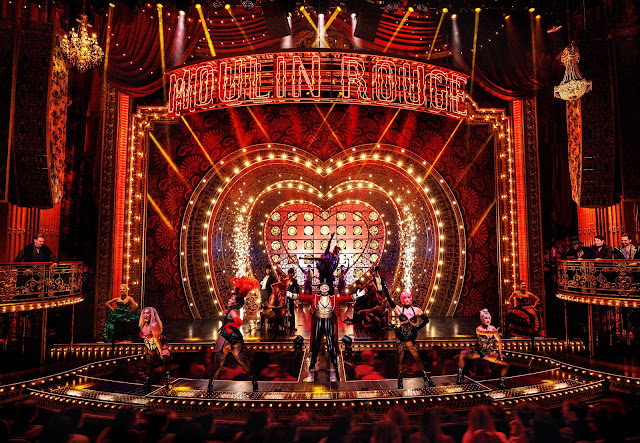 If there have been more lavishly packaged and enticingly portrayed depictions of decadence and debauchery than this spectacular stage adaptation of Baz Luhrmann’s filmic masterpiece, then I must have missed them.

For its Sydney season, Set designer, Derek McLane has transformed the cavernous Capitol Theatre into a dazzling Belle Époque fantasy of red velvet, gilded antiques and glittering chandeliers, complete with the legendary Moulin Rouge blue elephant and windmill, among which gorgeously costumed Bohemians prowl and preen erotically as the audience enters.

The recent announcement of the imminent closure of that other famous cabaret, The Paris Lido, which could not have been foreseen when this show was being created, provides an unexpected tinge of poignancy and relevance to the musical’s strengthened storyline which now centres on a fictitious group of Bohemians who unwittingly become involved in a scheme to save The Moulin Rouge from the same fate.

As the venal proprietor of the Moulin Rouge, entrepreneur, Harold Zidler, Simon Burke provides the core energy for the show with an exuberant, campy, over-the-top performance.

Harold Zidler is trying to persuade the wealthy Duke (stylishly portrayed by Andrew Cook) to invest in his establishment. While the Duke is interested, his price includes Zidler’s dazzling diamond and leading lady, the beautiful Satine played by Alinta Chidzey (who Canberra readers will remember as a vivacious Mary Poppins in Free Rain Theatre’s production of that musical).

Zidler sets up an assignation between the Duke and Satine, but his plan is thwarted when Satine mistakes a handsome young songwriter, Christian (Des Flanagan) for the Duke and falls in love with him.

The ensuing mix-ups and complications provide plenty of opportunities for insanely athletic and raunchy dance routines, choreographed by Sonya Tayeh, and a seemingly endless stream of witty, laugh-out-loud medleys incorporating snippets of songs by contemporary songwriters, Adele, Sia and Lorde among them. Favourite songs from the film are also there including the romantic duets for Christian and Satine, “Your Song” and “Come What May” as well as a compelling performance of  “Nature Boy”, performed by Tim Omaji as Toulouse-Lautrec. Canberra readers will know Tim Omaji as rap-dancer, Timomatic.

Alinta Chidzey oozes the cool sophistication and glamour of the cabaret star, Satine. She’s an accomplished singer, dancer and actor, who wears her stunning costumes with flair.  Chidzey is perfectly matched with Des Flanagan as the handsome, love-struck song-writer who speaks in song lyrics. Their scenes together, and especially their charming duets inside the blue elephant, provide the show with the romantic heart which offsets the worldly cynicism elsewhere.

This production scooped the pool with no fewer than 10 Tony Awards at the 2021 Tony Awards and it’s easy to see why. But whether you’re attracted by the opportunity to experience Alex Timber’s award-winning staging, Derek McLane’s truly amazing settings, Catherine Zuber’s lavish Toulouse-Lautrec inspired costumes, the extraordinary choreography of Sonya Tayeh, Peter Hylenski’s amazing sound design which you feel as much as hear, Justin Townsend’s brilliant lighting design,  the catchy orchestrations devised by Justin Levine and executed to perfection by Luke Hunter’s band of top musicians, or the world-class performances of the Australian cast, this production of “Moulin Rouge” is the one musical you simply cannot miss.