THE FUNHOUSE WITH PAUL MCDERMOTT AND GUESTS. ADELAIDE CABARET FESTIVAL 2022

A tattooed punk vision in leather braces and a mini  dress skirts The Famous Spiegeltent on roller skates.  “Welcome to the Funhouse” the programme says – “a dark carnival of minstrels and misfits where nothing is as it seems.. Host Paul McDermott is in top form and fine voice as he belts out the opening number, Let The Show Begin. McDermott is his usual self, excessively anarchic, cynically ascerbic and unflinchingly offensive. No-one minds. This is cabaret on the dark side and every insult heaped on some unsuspecting audience member is worn as a badge of honour, The quick-witted may sling back the swift retort, while the audience laughs at McDermott’s barrage of “Shut the f..k” ups. With Plus One, the irrepressible musical director and Riff Raff of the Fun House, Glenn Moorhouse, McDermott unleashes a powerhouse of energy and wit before introducing his guests.

There’s internationally renowned Drag Queen, Philma Bocks, resplendent in hyperbolic Fifties Barbie dress and sculpted wig.  In a clever illusion, she reveals layer after layer before the final expose. The peeling is clever, the final revelation somewhat of a letdown. As Gipsy Rose Lee always said, “Leave them in suspense and wanting more.”

Comedian Dilruk Jayasinha spins out his set with swift fire repartee. His comedy arc is cleverly honed and he carries his audience along with this build up to his elimination on I’m a celebrity… get me outta here.  Sex is hot stuff when it comes to cabaret. Comedians and burlesque artists revel in the titillation, thrill or crudity of the comedy routine. Prudes beware. You have been warned. The audience who dared to take the risk to enter the darker side of cabaret had a great time at The Funhouse. But like anything, it’s all in the timing and Jayasinha’s challenges to get his head to go where he wanted to get to was a drawn out impossibility. Besides it could have been responsible for his bad back. Timing is all. 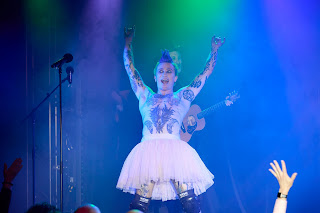 The band rocked on with the theme tune to Peter Gunn as Captain Ruin took to the stage again in a tutu and strait jacket to perform his escapology act. His final act is what had the women laughing while the men tended to cover their eyes. Maybe they felt the pain of trying to lift a seven kilo bowling ball with the male organ. Whatever turns you on.

But it’s the clean shaven McDermott who steals the show with his repartee, charm and swipes at the anti-vaxxers, right wing Pete Evans and the dark side of Hindley Street that put the fun into The Funhouse. The Canberra Boy from Marist College learned the art of satire and irreverence from his educational upbringing, cemented by the Doug Antony Allstars and refined by his anarchic charm. I longed for a solo show by this showman with ultimate elan and a fabulous voice. The master of adlib and improvisation, I would like to see him in a scripted show with a director who shared his humour and view of the world and his loyal Plus One by his side. That would be a surefire sellout Funhouse show.