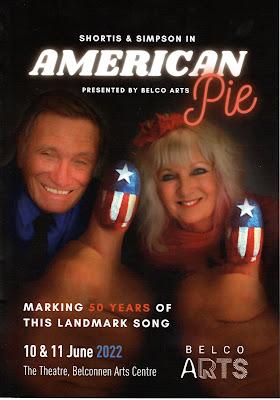 Moya Simpson and John Shortis have maintained their special status in our local music scene.  They write, sing and play in a folk kind of way, with an unpretentious purpose to educate us about our culture, through easy humour, soft but telling satire, and sometimes deep empathy.  In this 80 minute show, they explore the meaning of Don McLean’s lyrics in a celebration of 50 years of popular recognition of his 6-stanza song, American Pie.

The essence of the show, demonstrated through singing the songs of the singers, from Buddy Holly to Janis Joplin, whose stories are behind McLean’s lyrics, is to explain what he meant by

The show was a revelation for me to hear with such clarity all the words of all the songs sung by Moya, even when taking on the style of each singer in some 28 songs most of which I thought I knew.

Connected by John’s history of the music and the times from the 1950s, related to the singers and bands McLean was referring to:
sadly (When I read about his widowed bride);
ironically (Do you believe in rock ’n roll, Can music save your mortal soul);
satirically (And while Lennon read a book on Marx / The quartet practised in the park);
or horrified (Oh, and as I watched him on the stage / My hands were clenched in fists of rage),
I understood in a new way the breakout from the complacency of the 1950s, why The Times They [Were] a-Changin’, and what it meant when “the three men I admire most: The Father, Son, and Holy Ghost” were murdered – the first in 1963, and two in 1968.  No wonder Don McLean was distraught, writing and singing “So bye-bye, Miss American Pie” in 1972.

It was a fitting ending to the show for Moya to sing that other song by Don McLean in sympathetic memory of the artist Vincent van Gogh as her encore, after the full house acclaimed the duo, following singing together the whole six stanzas and choruses of American Pie.

Her rendition of Vincent, beginning with
Starry, starry night, paint your palette blue and grey ·
Look out on a summer's day, with eyes that know the darkness in my soul
brought me near to tears.  There was humour and even hope for a better world after our recent election during the show; but in the end American Pie is about accepting reality – but not ever letting the music die.


Posted by Canberra Critics Circle at 12:20 AM