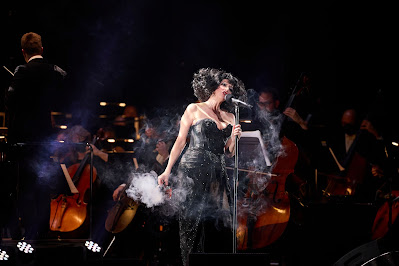 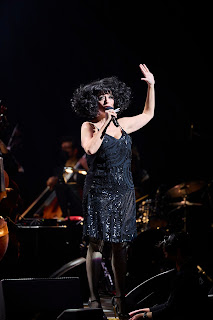 There is unique. And then there is Meeow Meeow. In a return visit to Adelaide after wowing audiences across the world, Meeow Meeow’s Pandemonium loses none of Meeow Meeow’s extraordinary, original and hilariously funny dynamism. She is the entertainer and singer par excellence. Accompanied by the Adelaide Symphony Orchestra under the baton of conductor Nicholas Buc, Meeow Meeow’s Pandemonium is everything it’s cracked up to be, a riotous flight of the imagination into the realm of the unexpected and the magical. 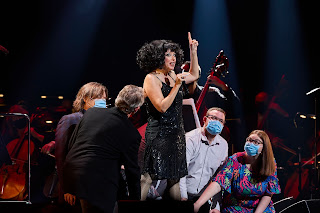 Aficionados will revel in the familiarity of Meeow Meeow’s effervescent and irrepressible, mischievous wackiness. Surprise is also in store as audiences wonder where she will appear from, or whether indeed she will appear. Suddenly the spot captures her at the front of the Dress Circle. Her leg launches over the balcony before deciding on a wiser approach to the stage. It is her cheeky coercing of audience members to help remove her pants that sends the audience into paroxysms of laughter.  Two unsuspecting men are lured onto stage to be up close and personal as she sways to the melody of Broadway or the songs of the Weimar cabaret. With her powerful, colourful voice that can soar from pop to opera and everything in between, Meeow Meeow can as easily sing the heartache of Surabaya Johnny as the  skipping sounds of the yodel from the peaks of the Swiss Alps..  Her vocal range is incredible -from Berlin cabaret to French chanson to the heartfelt emotions of her original songwriting with Ian Grandage or her interpretation of Jacques Brel’s Ne me Quitte pas. 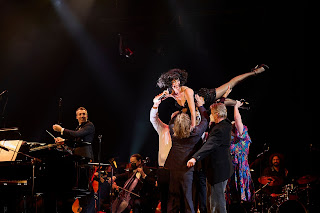 Throughout her two hours on stage, Meeow Meeow doesn’t let up. Every moment is a magnet to her audience. Whether dragging the unsuspecting audience onto the stage or handing out roses to be thrown during her song or changing costume before everybody’s eyes with a running gag “I have to do everything myself” Quick with the quips, the Queen of Quirk quickly retorts when an audience member, coerced to join her during her Berlin cabaret number stumbles backwards to the floor, “The Fall of the Third Reich” she cries to uproarious laughter from the audience, thankful that they weren’t singled out. To top it all off, in an act of outrageous daring, and bemoaning the lack of a trapeze for her act, Meeow Meeow decides to body surf across the audience. Hands held high to support the weight, the audience in the stalls are treated to yet another hysterical challenge that they may not have bargained for.

Meeow Meeow is the supreme mistress of her art, the high priestess of her church the theatre. There is no epithet sublime enough to describe her unique theatrical contribution. She is simply one of a kind, an international icon with a penchant for transporting her audience to a world beyond the predictable. Nor is the Adelaide Symphony Orchestra immune from her contagious audacity. At the beginning of Act 2 they enter in single file to present their own particular bow with their instruments in hand. At another moment, the entire orchestra erupts into a moment of pandemonium, reveling in the spirit of Meeow Meeow’s zany world of comedy and cabaret.

Meeow Meeow’s Pandemonium is a celebration of fearlessness and the courage to be oneself. All art is political. All songs the anthems of love lost or love desired. Meeow Meeow spreads the love and the audience responds with a resounding standing ovation. They leave the theatre far more enriched than when they entered. Their evening’s entertaainment in the company of Meeow Meeow’s pandemonian and brilliance will forever be a night to remember.

In case you were not able to see the show, here is some information to help you feel as though you were there!

IAIN GRANDAGE and MEOW MEOW In This City

WASHINGTON One For Sorrow

IAIN GRANDAGE and MEOW MEOW Tear Down the Stars

PATTY GRIFFIN Be careful/All the girls