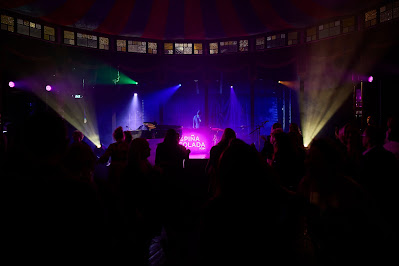 The Famous Spiegeltent on Adelaide’s Festival Plaza rocks to the sound of disco.  Lights bathe the floor in colour as the crowd dances wildly to the beat, bodies pulsating, arms flailing and spirits soaring. The Spiegeltent has been converted for late night festival goers to the Pina Colada Room, the Adelaide Cabaret Festival’s 10.30 to Late night venue for those seeking a wild time after the shows. The bar is busy and on and around the floor the party=goers laugh and talk as their bodies sway and swerve, THE cabaret has come to town and the Pina Colada Room is the place to let your inhibitions go and revel in the late hour atmosphere. Host for the night, Reuben Kaye weaves through the crowd, a living Dionysus, outrageously gay, divinely decadent, a towering vision of glitter and glam, inviting his devotees to abandonment and revelry. For all who come under his spell tonight will be their night of nights. The mirror ball turns, Light spins and darts across the space and Kaye launches into Divine Comedy’s Dark Days Are Here Again. His voice is the clarion of cabaret – renting the air with dangerous defiance, crashing through convention and powering its way into hearts and minds. Charisma cascades through his vocal chords as he asserts his undisputed place as the devious Divo of dark cabaret. What he does with a microphone is left for readers to imagine and for audience to wonder at.

A spotlight shines on a singer in the corner of the Spiegeltent.  The voice of a Siren, bewitching and  seductive soars through the air. As she rises and slinks sensuously onto the stage, the iconic voice of Tina Arena lures us towards a state of hypnosis captivated by I Feel The Love. The audience is entranced, silently  bathed in her love and the magic of her song. “Have fun” she says as she leaves the audience to their night of dancing, celebration and entertainment.

“How do you top that?” the irrepressible Reuben Kaye asks as the Cabaret Festival’s Artistic Director and internationally acclaimed singer and Aria Hall of Fame inductee vanishes into the night. There is no need. Reuben Kaye is one of a kind with the gift of wicked, delicious outrage in banter and in song. The night is his to command and he laps it up, teasing two young audience members with Charles Aznavour’s Sailor Boys and Henry Nillson’s Without You hauntingly filling the Spiegeltent with the desperate sound of longing up close and personal with one of the young men.

Before bringing the revels to a close, Kaye introduces the other act of the night, the brilliant and talented trio from Simply Brill. Michael Griffiths, Amelia Ryan and Michaela Burger. With all the gusto they could muster, these three   of the cabaret brought The Brill on Broadway to the Spiegeltent. In the late Fifties and Sixties The Brill under producer Don Kirschhner saw the emergence of a new wave of female singer/songwriters including Carole King, Cynthia Weil and Ellie Greenwich. On the eve of a sexual revolution they were to change the course of music history. Griffiths, Ryan and Burger burst onto stage and fired up he audience with a rollicking rendition of Cynthia Weil and Barry Mann’s We’ve Gotts Get Outa This Place.

It’s the last thing the audience wanted to do as Kaye launched into his closing number. With all the sheer force he could muster, Kaye let rip with David Bowie’s Rock ‘n’Roll suicide  The audience tumbled out into the cold night air and the Pina Colada Room closed its doors for another night. Over the next two weeks singer/comedian Yana Alana and singer Libby Donovan, this year’s winner of the Caberet Festival’s prestigious Icon Award will host the nights at the Pina Colada Room. Every night is a new experience and in the lyrics of Sondheim  I’m so glad I came.

Posted by Canberra Critics Circle at 12:57 AM