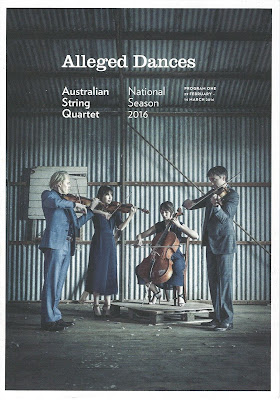 In its first ever Canberra season, the Australian String Quartet gave an impressive first of three concerts for 2016.  Joined by percussionist Clare Edwards for two of the works presented, the concert was nicely varied with two more traditional works by Beethoven and Schumann book-ending a late 20th century work by John Adams and a world premiere by Matthew Hindson.

Beethoven’s String Quartet in B flat major, opus 18, number 6 is an interesting work with an unusual beginning to the final movement.  It was played very well by the quartet.

Matthew Hindson’s String Quartet number 4 for string quartet and percussion was the world premiere.  It comprises two contrasting movements, one frenetic and the other tenderly lyrical.  The combination of strings with the vibraphone, expertly played by Clare Edwards, was fascinating and enjoyable.

Three excerpts from “John’s Book Of Alleged Dances” were unusual works with the normal piano part replaced by Clare Edwards with percussion on an assortment of plastic and wooden bowls as well as a heart-shaped cake tin.  The resulting combination of strings and percussion for these tuneful dances was delightfully entertaining and musically satisfying.

Schumann’s String Quartet in A minor, opus 41, number 1 is rarely played but it’s a beautiful work with a nicely upbeat last movement.  It was played joyfully and with great precision by the quartet.

There was a good explanation of the works from the players’ point of view by Dale Barltrop and Francesca Hiew and the program notes were also especially informative.

This review was first published in the Canberra City News digital edition 6 March.  Len Power's reviews can also be heard on Artsound FM 92.7 'Artcetera' program from 9.00am Saturdays.