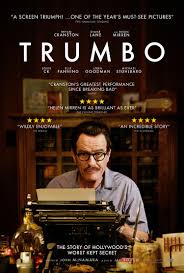 Only in Hollywood where life is performance art could a flamboyant screenwriter tell a government official to sod off in such style. Could it be only in America, the country of monumental contradictions, that a thinking man working in Tinsel Town, owner of a fine home with a garden lake, feels entirely comfortable in his conviction that he is a Communist?

Dalton Trumbo was such a man, both radical and rich, and it has been a pleasure to meet him in a movie that is surely overdue. He was the figurehead of the Hollywood Ten, practitioners blacklisted by their own industry in the 1940s-1950s on suspicion of being Communist sympathisers, and is played by the small screen's very naughty bad boy, Bryan Cranston of Breaking Bad.

Trumbo's response to the famous question ‘are you now or have you ever been a member of the Communist Party' at the House of Un-American Activities Committee hearing was typically witty and informed, turning the question back on his interlocutors. It was 1947 and the world was being catapulted into the Cold War.

You can watch the HUAC exchange on YouTube, complete with cutaways that capture celebrities like Bogart and Bacall and the ripples of audience laughter that accompanied it.

Just as cheeky is his shirt-fronting of John Wayne (a fittingly lofty David James Elliott) while campaigning for the freedom of speech enshrined in the First Amendment. Trumbo was a man who was true to his working class roots, ready to join the picket line in support of industry colleagues whose wages did not reflect their contribution to Hollywood as it straddled success during its golden era.

Trumbo was a man who took on what was wrong with the system, a hero at any time. It is easy to recognise that he was larger than life, though an enduring image from this film will be of him writing in the bath, cigarette holder clenched between his teeth, whiskey and amphetamines close at hand. Maybe it was the only oasis of quiet in a noisy family home, but some scenes suggest he could be a petty tyrant at home with his long-suffering wife (Diane Lane) and their children.

What matters more, I think, is the film's portrait of the times that caused the bizarre proceedings at the HUAC to take place. I doubt that director Jay Roach is the man for this kind of subtlety, or of recognising the unique ability of mass communication, whatever side of politics you are talking about, to deliver propaganda and consensus in digestible form.

On the other hand we would be disappointed if a movie by Roach, essentially a comedy director, did not deliver. He had us bent over double with laughter in the first and best Meet the Parents, and has had the comic flair to make a success of the Austin Powers comedies.

Of the talent working with Roach here, Helen Mirren is a stand-out as gossip columnist and ideological enforcer Hedda Hopper. She seems to have had no trouble letting the juices flow, while Cranston maintains a tight, pained presence for the duration.  The other great character is Kirk Douglas, played so well by New Zealander Dean O'Gorman. What an interesting man that actor was.

Some of the key moments in this film about a wordsmith are weak. Note to screenwriter John McNamara: sharing your sandwich at school does not make a Communist. However, some excellent moments include the final speech that Trumbo gives when he is at last formally acknowledged for his work is an absolute cracker.

Trumbo is less a tribute to a fascinating man and his turbulent times, than it is terrific entertainment, played more for laughs than for raising the inherent issues about freedom of speech that are of relevance to us today.