The Key will keep the Lock, Day of the Innocents, The True Mirror

As Rona Munro’s vast trilogy, The James Plays, draws to a close, the young future James lV stands before the newly invented mirror, removes his clothes and wraps chains around his bare flesh. Rousseau’s words resonate at the image-“Man is born free, but everywhere he is in chains” The young king stands exposed, son of his extravagant, vain and irresponsible father, James lll, grandson of the fearful child who became a warrior king, and the great grandson of the first of the Stewarts, the poet, the lover, freed from English chains to rule a  violent and divided land.


Superlatives are inadequate to do justice to the staging of this epic saga of betrayal, treachery, ambition and murder. But it is not the treachery of  Regent Murdac (John Stahl) and his scheming, ruthless wife Isabella (Blythe Duff) and their sons against James 1 (Steven Miller) or the sinister conniving and manipulation of James ll (Daniel Chill) by his chancellor, Livingston (John Stahl) or the plotting of the overthrow of James lll (Matthew Pidgeon) by Lord John (Ali Craig) and the young Prince James (Daniel Cahill) that alone fuels the powerful drama of the co-production by the National Theatre of Scotland, the National Theatre of Great Britain and the Edinburgh Festival 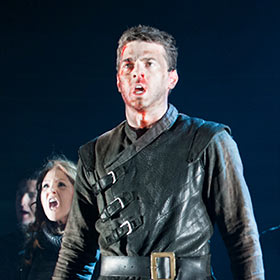 At its core, the trilogy is a domestic drama, a story of families and the motives that drive them and their struggle for survival in a cruel and harsh world. It is the powerful, riveting tale of an English queen, fearful for her life, her son, who clambers into a box to hide from the dangers of the outside world, his son, fearful of the treachery of a childhood friend and his son who will spurn his own child, only to have the child spurn his father in return. Munro’s text is strikingly contemporary, told with fervent passion and immediacy. Mothers strive to protect their children. Fathers abuse their innocent and helpless sons. Children cower in fear before uncaring adults. A brother and sister comfort each other in their moments of fear. The first two plays, The Key Will Keep The Lock and Day of the Innocents retain an authenticity of period and style. Munro shifts our perceptions and the third play, The True Mirror, opens with the characters of James lll’s court jiving in Fifties clothing upon the stage. Anachronism heightens perception of the universal nature of the human condition. Certainly it appears more intense, driven by the dark feelings of a brutal age, but it is humanity, cradled in its time and enduring the timeless pressures of the heart and mind.


Freed from the constrictions of the language of the time, Munro tells the stories plainly and directly. Each chapter reveals a fresh human truth, whether it is a king’s struggle to assert his rightful authority or a mother’s plea for the lives of her sons, or a son’s desperate desire for the love and respect of a father. In the final play, the extravagant and vain James lll brings the newly invented mirror to his queen to “as ‘twere to hold the mirror up to Nature” and reveal the truth of who we are. We are all humanity for all time and it is that truth that must be confronted by each generation.


On the vast stage of the Festival Theatre and before a packed auditorium with audience seated on raked seating at the back of the stage, the brilliant ensemble play out this epic psychological thriller in which birth, life and death mark the passage of life’s traverse.  The choreography is powerful and dynamic, as James 1 wages stylized battle with the warlords above and around the bed where his Queen Joan  (Rosemary Boyle) is giving birth to the future james ll. Life and death are the perpetual bedfellows of our existence. 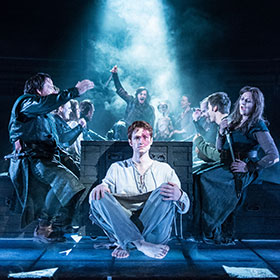 The James Trilogy is no dense and plodding historical epic. It explodes with drama and erupts with moments of black or ironic comedy. In the third play, it is the women that feature, and the mood lightens with their rational and sensible view of a world dominated by the dangerous and foolish acts of men. As a lesson to a modern world it is the cool and sensible Danish born Queen Margaret (Malin Crepin) who eventually brings some respite and peace to a war-torn Scotland.


The National Theatre of Scotland’s Artistic Director, Laurie Sansom, has woven together a seamless thread of high drama,  comedy and thrilling narrative. All aspects of this ambitious, bold and magnificent production are flawless. Audiences leave the theatre, not only with a greater knowledge of this bloody, lawless and terrible time in Scottish history, but also with a deep understanding of the human condition and the mirrored life that reflects the  inherent truth of our existence. 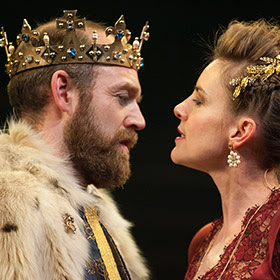 Sadly, Australian audiences will only have the opportunity to experience this triumphant production in Adelaide, or across the sea in New Zealand if they can. Perhaps, if we are fortunate enough, The James Plays will one day come to a cinema near you through NT Live. In the tradition of such epics as the Mahabharata, The War Horse or The Roman Tragedies, The James Plays is a classic masterpiece of popular storytelling. It is rare for one to experience the theatrical grandeur, the outstanding performances and the superb staging of The James Plays trilogy.
Posted by Canberra Critics Circle at 10:33 AM