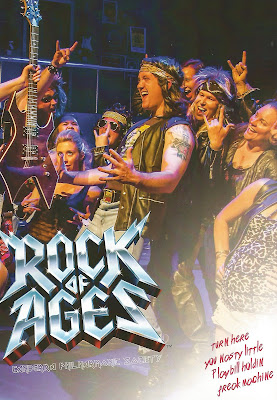 Presented by the Canberra Philharmonic Society

The Canberra Philharmonic Society has hit the bulls-eye with their current production of “Rock of Ages”.

A jukebox musical built around classic rock songs of the 1980's, this production of  "Rock of Ages"  is notable for its well-chosen, energectic cast,
excellent set and costumes, great band, spot-on direction and choreography which all combine to produce a thoroughly enjoyable evening in the theatre.

Set in the milieu of   the seedy bars and brothels of the 1980’s Sunset Strip area of Hollywood, “Rock of Ages” tells the story of the threatened demolition of The Bourbon Room, owned and run by Dennis Dupree (Ian Crocker) and his sidekick Lonny Barnett (Tim Stiles).  An aspiring rock singer, Drew (Dave Smith) works at the bar, and when a young would-be actress, Sherrie, (Emma McCormack) arrives at The Bourbon Room, Drew persuades Dennis Dupree to employ her as a waitress. Naturally Sherrie and Drew immediately fall in love.

It’s not a lasting love however because when famous rock star Stacee Jaxx (Will Huang) calls  at the Bourbon Room, Sherrie is immediately smitten with him and has sex with him in the men’s lavatory. Miffed by this, Drew discards Sherrie to pursue an offer of a recording contract. Dupree then fires Sherrie at the insistence of Jaxx.

All is not lost because Sherrie soon meets up with brothel owner, Justice Charlier (Shell Tully) and accepts her offer of employment as a stripper in her nearby “gentleman’s club”, The Venus Club.
If you are interested in how all this plays out, you’ll have to see the show yourself, because along the way the narrator helpfully reminds the audience that this is not real life, just a musical.

Although none of the characters in the show are admirable or even likeable, but, as portrayed in this production, they are entertaining.  The script is disarmingly self-deprecating, and the jukebox score is packed with great rock songs, neatly arranged so that the lyrics seem to commenting on the action, and explaining the feelings of the characters.

Jim McMullen and his talented cast and creatives have managed to devise a production which is diverting and hugely entertaining, utilising excellent set, costumes and choreography which successfully capture the sleaze and tackiness of the period and the characters.

Dave Smith and Emma McDonald invest their roles as the star-crossed pair, Drew  and Cherie, with surprising charm. Smith, who appeared as Jean Valjean in Philo’s last production of “Les Miserables”, surprises also with his gutsy Rock ‘n Roll singing and swagger.  Canberra newcomer McDonald also knows her way around a rock ballad, and manages to bring just the right degree of warmth to an otherwise unappealing character.

Will Huang gives a mesmerising performance as the drug- addled rock star, Stacee Jaxx. Repulsive, funny and outrageous, Huang dominates every scene in which he appears right up until his final pathetic exit.

But it is Tim Stiles who runs away with the show with his winning turn as Dennis Dupree’s sidekick Lonny Barnett.  Stiles, as Lonny, narrates the show  in an engaging, laid-back style which quickly has the audience eating out of his hand.  He also provides one of the show’s highlights with his duet with Ian Crocker, “I Can’t Fight This Feeling”.

Among the other stand-out performances, Ian Crocker is spot-on casting as Dennis Dupree who almost makes the audience care about the fate of his beloved Bourbon Bar.  Anita Davenport sings strongly and turns in a fine comedic performance as the activist, Regina Koontz.
Hayden Crosweller displays an excellent talent for physical comedy as the nerdy  son of German Property developer, Hertz Klinemann, played with appropriate Teutonic fluster by Berin Denham.  Shell Tull, as the owner of the Venus Room strip club, displayed striking presence, and a great blues voice, providing  a highlight with her singing of “Heading Towards Venus”.

Throughout the show, Max Gambale’s kick-ass band drives proceedings along with an authentic raunchy rock sound and achieves an excellent balance with the singers which allows most of the lyrics to be heard.

So what’s not to like with “Rock of Ages”?  Well ..the kids are going to love it, but perhaps  parents considering a matinee should be alert that the dialogue contains coarse language, and the often gratuitous, mimed sexual activity is quite graphic.