Hillary Clinton has just swept to victory in the Big Tuesday Primaries when I visit Adelaide’s Bakehouse Theatre to see Bob Paisley’s performance of Bill Clinton Hercules, under the direction of Fringe veteran, Guy Masterson.  It takes Herculean courage to take on the role of the 42nd President of the United States. In Bob Paisley, Clinton is lucky enough to have a doppelganger take on the gargantuan task of bringing Hillary Rodda-Clinton’s husband to life upon the intimate black box stage in Bill Clinton-Hercules. 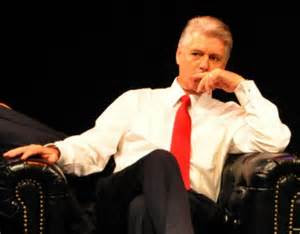 With only a leather armchair and a small side table as a set, Paisley fills the stage with the sight and sound of a man who remains vivid in the minds and hearts of people who follow his every move on Hillary’s campaign trail. The luring voice, the carefully brushed silver hair and the  stylishly cut suit with the bold red tie mark a man of authority, with a voice of assurance and private passion in a confused and uncertain world. Paisley is all this and more. Charisma emanates with every smile. He lures his audience in, spinning his charm by describing the late poet Seamus Heaney’s, Cure at Troy, a verse adaptation of Sophocles’ Philoctetes. Clinton describes the characters of Odysseus the warrior, Neo, the negotiator and Philoctetes the archer with the magic bow and arrow, a gift from the God Hercules that can recapture Troy with the aid of the god Hercules. It would appear that Paisley has drawn a long bow to imbue Clinton with the qualities of Sophocles’ Greek heroes. But there are those who would argue that during his presidency, Clinton achieved legendary status, except perhaps for one slight indiscretion that became his Achilles Heel.
Using the legend as a leitmotif, Paisley’s carefully researched monologue weaves myth and fact into a fascinating and illuminating account of Clinton’s life. We learn of his birth in the ironically named Hope in Arkansas, of the death of his father three months before Clinton was born; of his Hippie conscientious objector days, his meeting with Hillary and his eventual ascendancy to the presidency after a childhood of struggle.  We learn of his hero worship of John F Kennedy whom he met on the lawns of the White House when a young man, of Dr. Martin Luther King and Israel’s Yatzik Rabin, all victims of the assassin’s bullet. Clinton’s dry humour echoes in the warning not to become one of his heroes. 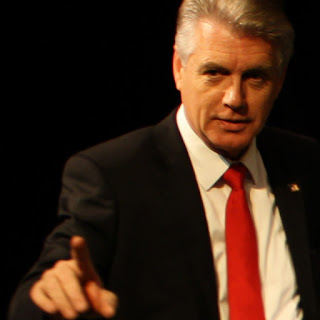 I am seduced by the  chronicle of his life, interwoven with the account of real events and the recorded use of the actual speeches of his heroes, and the friendship with Mandela, which fortunately avoided the fate of his other heroes. One senses that this colossus of politics strode the world stage with confidence, charm and passionate determination in the belief that he could bring hope and salvation to the world. Vanity? Perhaps. Divine inspiration.? Possibly. What a piece of work is this man who for a time brought some peace to the Middle East. And now? Well, perhaps it is time for another Clinton to mend the wounds and bring an end to our Trojan Wars.


The namedropping rings through the years. Familiar names of Madeline Albright,the feisty Secretary of State Newt Gingrich, Speaker of the Congress, Keith Starr, the inquisitor, Monica Lewinsky, the Femme Fatale intern, Alan Greenspan, the Reserve Bank Governor and the most villainous of them all, his former Chief of Staff, the conniving ruler of Washington’s real House of Cards, Leon Panetta.

It is here that Paisley’s Clinton voices his fearful foreboding and with evangelical zeal cries for the strength of Hercules to destroy Greenspan’s dreadful legacy where CEOs now receive 400 times the wage of an ordinary American, and where the former Head of the CIA, Panetta, threatens individual freedom.
It is also here that Paisley’s spell begins to wane. Evangelism floods Bill Clinton’s veins. Zeal turns to impassioned anger and President turned Prophet of the People exhorts his people to take up the cause, to rid the world of greedy corporations, of manipulating politicians and powerful banking interests. “You can be Hercules!” “Will you be Hercules?”  His cries fall upon the ears of a silent audience.
Paisley’s performance had surpassed its advertised duration. It has been an astounding impersonation of Bill Clinton, in gesture, voice and character, an Herculean President, whose story, told by an actor of Paisley’s power and conviction could hold an audience in the palm of the hand. If only he had stayed within the allotted time. Then maybe his audience would have risen to their feet in unison to do their hero’s bidding.