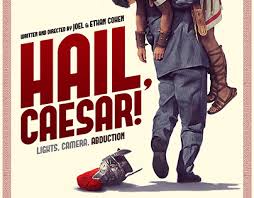 A cast bristling with terrific actors has to be any director's dream. By all reports, the talent in Hail, Caesar! were simply happy to work with the Coen brothers, whatever they were asked to do. So we have cameos to savour like Tilda Swinton's nervy twin sister journalists each vying for the scoop, and Ralph Fiennes' fastidious director coaxing a young cowpoke to act on a drawing room set. Performance is the thing, as it is for everyone. This is show bizobie Doyle.

The narrative tries to coalesce around one Baird Whitlock (George Clooney), a none-too-sharp star in a biblical epic who is kidnapped by a shadowy group of conspirators and whisked off to a Malibu beach house. It turns out they are a Communist cell, more intellectual than the earnest industry types who become allied with Dalton Trumbo, in the screenwriter's biopic that is also running in cinemas now and offers another angle on Hollywood in the 1950s.

Whitlock seems to somehow sleepwalk through it all and remains in costume throughout. That is, in breastplate and short leather tunic, and with sword that always gets in the way when he sits down. He engages with his captors and begins to show signs of Stockholm Syndrome. Very droll.

At another soundstage on the Capitol Studio lot, Burt Gurney (Channing Tatum) rehearses his song and tap routine with the rest of the crew, grinding away with a sailor's number. He looks the matinee idol in the making but Gurney has some seriously subversive plans afoot.

Running parallel with this kidnap 'drama' is the plight of synchronised swimming star DeeAnn Moran (Scarlett Johansson) who is pregnant but has no husband. The bump in her mermaid costume will soon show and it spells catastrophe. In 1950s, Hollywood was nothing like the free-for-all it is today.

Back at the beach house, Whitlock comes to and stumbles woozily into a meeting of the cell. One of his captors asks if he is 'wondering what's going on'. You may be too. The device for holding it all together is studio troubleshooter Eddie Mannix (Josh Brolin) whose job it is to set things right so that Capitol movies don't get on the wrong side of the Hays code and its requirements for public morality. Deflecting noisy columnists away from any hint of scandal is all in a day's work for Mannix.

Hail,Caesar! brings both the 1930s and the 1950s together in the frame with its Busby Berkeley-style set pieces and tap dance routines en masse, hinting at its origins. Apparently the Coens planned to set it in the 1930s when those dance extravaganzas were in their heyday and it seems they were unwilling to ditch the chance of staging them. The movie would have been the poorer without them and the energy and zest of old Hollywood that they convey. If Hail, Caesar! is a teeny bit anachronistic, who cares when there is spectacle, sharp writing and the talents of Johansson, Clooney, Tatum, Fiennes and Alden Ehrenreich on show.

Alden who? He is Hobie Doyle the cowboy who Fiennes' director can't corral, though judicious editing seems to make it right in the end. This obliging boy is much more comfortable riding a horse, in any position, and is a wonder with a lasso. However, he has enough screen time in his small part to showcase his easy charm and more unusual skills. A spaghetti lasso, anyone?

Hail, Caesar! doesn't have the narrative coherence of, say, everyone's favourite Coen comedy The Big Lebowski but it is also funny and sharp. A total nonsense that is at the same time so clever. Quite an achievement.