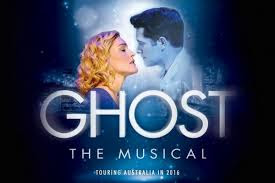 No matter what your reaction was to the heavily sentimental, paranormal 1990’s movie, which starred Patrick Swayze, Demi Moore and Whoopi Goldberg, this dazzling new stage adaptation, with its astonishing state-of-the- art high-tech wizardry and compelling central performances, provides an exciting and remarkably moving theatrical experience.

Adapted by Bruce Joel Rubin, who won an Oscar for best screenplay for the film, and directed by Matthew Warchus, who also directed “Matilda – The Musical, this stage version takes full advantage of the possibilities offered by LED screens, video projections and even illusionists, to create some truly remarkable stage moments, and for those interested in such things, is an excellent example of contemporary music theatre staging. But as clever as the effects are, it is ultimately the performances of the excellent cast that leaves the strongest impression.

Jemma Rix and Rob Mills are beautifully teamed as the young lovers, Molly and Sam, who, as the musical commences, are discovered busily setting up their dream apartment in a New York loft. Molly is a young artist and Sam, a high-flying banker. On their way home from a celebratory dinner, they are mugged and Sam is murdered before he can tell Molly he loves her.  However Sam’s ghost lingers, and discovers that, through a pseudo-psychic, Oda Mae Brown (Wendy Mae Brown), he can communicate with Molly.

The storyline remains faithful to the film and scenes set in busy offices, on trains and rainy New York streets transition seamlessly through a series of cleverly choreographed production numbers which propel the story forward.  Despite the technical wizardry however, it is the scenes in the loft, between Molly and Sam which linger in the memory, particularly the hyper-romantic pottery wheel scene, which of course is what everyone has come to see. It works a treat, thanks to the committed, emotionally –charged performances of Rix and Mills both of whom exude genuine star quality in these physically demanding roles.

The audience is always aware that Sam is a ghost, and that Molly can’t see him, but the physical chemistry between Rix and Mills makes their scenes together totally convincing and affecting.
Mill’s larrikin version of the hit song “Unchained Melody” in the first act was particularly appealing, while Rix provided a vocal highlight with her beautifully sung interpretation of “With You”.
Several members of the cast are reprising the roles they played in the U.K. and touring versions, among them David Roberts, who replaced Alex Rathgeber, as Sam’s disloyal and treacherous friend, Carl Bruner.   Roberts has a fine voice and presence and his journey from helpful friend to hysterical drug-addled assassin is chillingly realised.

Totally delightful is Wendy Mae Brown, big, bold and exuberant as Oda Mae Brown, the role which won Whoopi Goldberg an academy award as the pseudo-psychic who gets more than she bargained for when Sam discovers that he can use her as his medium for contacting Molly. Brown lights up the stage on every entrance and her introductory number, “Are You A Believer?” which she performs with two other generously proportioned off-siders, Evette Marie White and Lydia Warr, is total pizazz.

David Denis as the Subway Ghost and Ross Chisari as the low-life hit-man, Willie Lopez, both contribute memorable performances, and it was good to see former Canberran, Blake Appelqvist, among the hard-working ensemble.

The sound design is pin-you-back-in-your-seat loud, which seems appropriate for the New York street scenes, but rather overwhelming for the more intimate passages. Despite all the technical wizardry surrounding it however, Dave Skelton’s comparatively small pit band manages to make its presence felt achieving a satisfyingly punchy account of the attractive score.


This review first published in the digital edition of CITY NEWS on 21.03.2016
Posted by Canberra Critics Circle at 10:59 AM