SETH DRURY - BRING BACK THE BARITONE 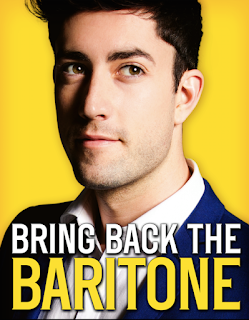 Tall and Coltish with a big, beaming smile and affable manner,  Seth Drury bore a striking resemblance to a young Hugh Jackman as he bounded onto  the stage of The Q in Queanbeyan to present the opening number of his show “Bring Back the Baritone”.  The song did nothing to dispel the impression either - a nicely phrased version of Rogers and Hammerstein’s “Oh What a Beautiful” from “Oklahoma”.

A graduate of the Regional Institute of the Performing Arts, and Brent Street, Sydney, Drury has been steadily  building his career performing in productions of “Grease”, “Fame !”, “The History Boys” and most notably, playing the lead in the Australian production of “Idaho! – The Comedy Musical”.

Returning home after performing with Universal Studios in Singapore, he launched his first cabaret “Unmasking Prince Charming” which was well received at the 2015 Melbourne Fringe Festival.

“Bring Back the Baritone” is his second cabaret creation, and besides from being an excellent showcase for the burgeoning  talents of Drury, the show contains several unexpected repertoire choices, bought about by Drury’s very inclusive definition of “Baritone” to embrace  singers as varied as Elvis Presley, Michael Buble, Bing Crosby, Johnny Cash and Peter Allen.

Expertly accompanied by Daniele Buatti on piano and Anyerin Drury on guitar and keyboard, highlights included beautifully sung versions of Lerner and Lowe’s  “If Ever I would Leave You” from “Camelot”,  Boubil and Schonberg’s “Stars” from “Les Miserables” and a nicely constructed  medley of Johnny Cash songs.

Special material in the form of a clever one-man parody of Queen’s “Bohemian Rhapsody”, and a terrific medley of songs associated with Frankie Valli and “The Jersey Boys”, provided opportunity for Drury to show off some quirky dance moves.
It was a pity that at this performance he demonstrated a tendency to depart from his script to make superfluous, off-the- cuff comments like “Isn’t that a beautiful song?”  This type of remark may engender a muffled audience response, but they also waste time, and rob the show of its polish.

Indeed, the script for this show would benefit from some sharpening to eliminate poorly considered generalities, such as the assertion that it was Bing Crosby who made “Old Man River” popular. Many eyebrows hit the ceiling at this remark, particularly when it was followed by a performance of what was described as being the Bing Crosby version of this song, which captured little of Crosby’s style or presentation, exposed some faulty intonation, and provided the lowpoint of the show.

The intonation problems resurfaced in the finale song, a disappointing version of the Jerry Herman’s “I Am What I Am”. This was a pity, because it robbed the show of its big finish.

There’s no doubting that Seth Drury is a talented performer of whom we can expect to see more.  “Bring Back the Baritone” provides him with an excellent showcase to show off his talents, but a session or two with an experienced director, to knock off the rough edges, could easily transform what is now simply “ a very enjoyable show” into a must-see.