An Audience with Machiavelli 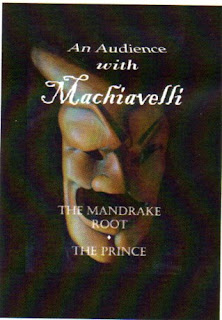 Rachel Hogan has taken the view that historically Machiavelli’s reputation as a force behind the worst political behaviour is at least a misrepresentation and more likely a denigration of an original thinker.

She shows us two sides of Machiavelli: as a writer of clever satirical farce, in her adaptation of his play The Mandrake Root (La Mandragola); and as a philosopher with a long-suffering wife, writing his major work, The Prince.

In both works we see that Machiavelli is essentially a moral philosopher: that is, he is concerned with teasing out the nature of ethics and therefore what constitutes moral behaviour.  In The Mandrake Root he sets up an ethical conundrum for the characters to resolve.  In Hogan’s The Prince we see him hide away in his study from the world, including his wife, as he focusses all his attention on working out how an absolute ruler must understand the reality of human behaviour, and therefore how to act properly as a ‘prince’ – meaning, of course, as a person in the position of the last absolute ruler in England, King Charles I.

Unfortunately for Charles, he failed to read the century-old text by Machiavelli – or failed to understand it – and so his subjects chopped off his head in 1649.  Even if he had seen and thought enough about La Mandragola for which Machiavelli was then more well-known, he might have understood that he needed to take much more care about presenting Catholic moral philosophy in the face of Protestant radical ideology.

If, like the lawyer Callimaco (Brendan Kelly), Charles had followed the advice of the spin-doctor Ligurio (John Lombard), then I’m sure he could have bedded his wife, the innocent faithful public, represented by Lucrezia (Jess Waterhouse), in safety via the ruse of the somewhat distorted turnip.

Even as the fake doctor – Oliver Cromwell – Nicia (Philip Meddows), after intercourse, became Lucrezia’s long-term lover, and even though her mother Madonna Sostrata (Nikki-Lynne Hunter) and the Catholic priest Father Timoteo (Tony Cheshire) had twisted all their moral arguments in extraordinary ways to satisfy Lucrezia’s qualms; then Charles and Cromwell could have got along just fine as King and Prime Minister, the baby could still have been baptised “The Commonwealth”, and the system which England still operates would have been born peacefully a century or three earlier.

Indeed if Charles I had appreciated the practical wisdom of Queen Elizabeth I, he might have kept his head.  Of course, all we can say today is “Long Live the Queen – Elzabeth II”! If she hasn’t read The Prince, I’m sure she behaves as though she has.

In The Mandrake Root Peter Fock plays Sira, the manservant who, of course, is the only one who knows everything about what’s going on, and is therefore also named Machiavelli.  Fock then plays Machiavelli, the philosophically engrossed and therefore highly impractical husband, with Nicol Tyndale-Biscoe as Marietta doing her best to keep the house and farm viable, even while he dutifully spends a month in prison for treason.  It obviously wasn’t just Charles I a century later who didn’t understand The Prince.  After all, it was the Borgia family who controlled Florence in Machiavelli’s day.  Real philosophy just meant treason to them.  I suspect there are some politicians today who might not treat him much better.

Since Hogan’s work attracted four Canberra critics in the audience (and even one on stage in the manipulative guise of John Lombard), I will leave consideration of the theatrical qualities of the production to others.  But it is a worthy presentation, thoroughly suited to this kind of city, and especially in keeping with the ghost of School Principal and Samuel Beckett aficionado, Ralph Wilson.  It’s good to see this little theatre back in operation. 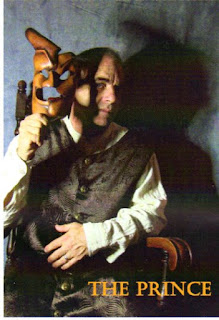