Could you coax a child to place his head in the mouth of a dinosaur. Scott Wright can. Or ask a young girl to pat the nose of a dinosaur. Scott Wright can. Or maybe ask a brave Dad to hug a dinosaur. The director of Erth can.
Erth is an awesome interactive show about all kinds of dinosaurs, found mainly in Australia and America, that is until sixty five million years ago when an enormous asteroid rained fire upon the earth and wiped out all living things. But the fascination with dinosaurs never went away, and Wright and his four puppeteers bring dinosaurs to life to amaze, surprise, terrify and make young children scream with fearful delight.
Wright is the consummate puppetmaster. Years of experience have taught him the ways of the child and the cheeky larrikin within immediately strikes up a gentle, non-threatening rapport with the young members of the audience. 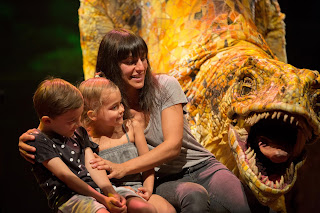 Occasionally there are the surprises when a very young child screams with howls of sheer dismay when his mother is taken onto the stage to be Rankine’s “Mum” and receives an unexpected birthday present - a carnivore dragonfly like dinosaur that sucks out the brains for food. Not all well-laid plans go to script. Wright and his company flaunt W.C. Fields’ advice never to act with children and animals. It is after all the very lifeblood of this amazingly life-like display of dinosaurs from the young babies to the towering giants and, of course, the fearsome,
roaring T Rex.
The prehistoric puppets, expertly handled and manipulated by four adroit puppeteers, and surrounded by inflated plants of eons ago, fill the wondering eyes with fascination. Wright never lets his young audience be fooled. Every action is carefully explained to create a safe environment in which children understand they are active participants in a show about dinosaurs and not with real ones, although they appear so real and could well frighten the very young. The show is purposefully advertised for children five years and over.
While the complex names of many of the species pass over me, it is obvious that many of the children are familiar with dinosaurs and are engrossed in a show that can seem to bring the familiar animals to life.
At the end of the show, the puppeteers bring the dinosaurs into the foyer, where children can touch them and be assured again that they are not real, but they are realistic. The one hour performance has been a riveting, fascinating and educational experience for young and old alike and many of the young children will be asking parents for dinosaurs of their own and tickets to Erth’s other Festival production, the Prehistoric Aquarium. 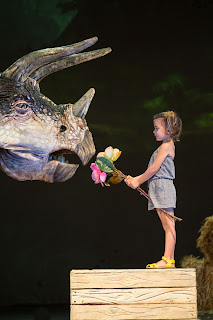 For this adult, as well as a lesson in the variety of dinosaurs that roamed our earth, their physiology and their eating habits, it is a lesson in the mysteries of our universe, our insignificance within the greater scheme of things and the precious gift of a child to wonder. As the young audience sat wide-eyed, or cried out their enthusiastic responses, I applauded Erth’s talent to excite and educate. If only every young child could share this gentle and special experience. As long as it didn’t lead to an oversupply of dedicated paleontologists!
Posted by Canberra Critics Circle at 5:24 PM