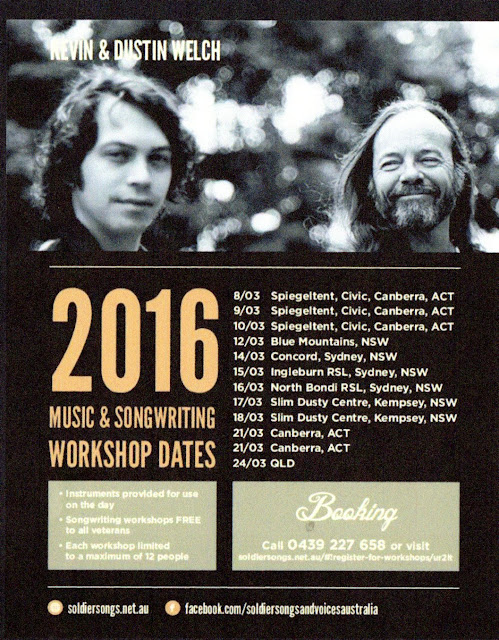 Though all four of these performers have established careers as singer/songwriters, the purpose of this small-scale presentation was special and important beyond mere entertainment.  Over an hour and a half, they gave a small audience a concert, each singer in rotation leading with songs of significance to them.  What I had been told would be a 75 minute session just naturally extended to 90 minutes in a mood, in some ways of celebration but often in sadness.

The event was the beginning of a tour by father and son Kevin and Dustin Welch following the success of Dustin’s program in the US to establish local songwriting workshop and performing groups for war veterans, as a way of helping people cope with the trauma caused by war experiences.  So some songs we heard told stories of men being unable to keep up stable relationships – needing to ‘move on’, or to find solace in drugs and alcohol.  Others were about men finding a different kind of woman, and new kinds of relationships, as they travelled.

The American songs seemed to me often in the old tradition of the cowboys, but now with a new meaning.  It was the Australians who brought home our stories.

Kevin Bennett took us back to his upbringing in a timber milling place – in fact actually in the timber mill – and his discovery as an adult that he had Aboriginal heritage.  In a sense, as for the vets in Dustin’s program, through music Bennett explored the experience, and celebrated his life in a thoughtful way, especially in his song ‘I was Born White; but I’ll Die Black’.

I had heard Fred Smith sing his ‘Dust of Uruzgan’ at a National Folk Festival about our soldiers’ experiences in Afghanistan, and on this occasion he had a new song about the men killed there, which he was asked to write by surviving mates.  His theme as I heard it was that though ‘Crash’ had done all the right things and even more than expected in battle, it wasn’t right that he should have died.  It was a commemoration tinged with terrible sadness.

The important message is about the role of music and song in assisting people to cope with horror and tragedy.  As we are now beginning to understand the brain functions involved (for example on ABC’s Catalyst program, 8 March 2016, showing how music helps dementia and Parkinson’s disease patients), Dustin Welch has found similar calming and coping effects among war veterans.  This testimonial from Erika Vandenberg, SGT, US Army is crucial to our understanding, and shows that it’s not only a men’s issue:

“I would like to tell you about my life changing experience with this organization, but first a little background on me. I am an OIF Vet with a traumatic brain injury (TBI) and PTSD. I lost the ability to speak from my TBI and it decreased my vocabulary immensely once I regained the ability to communicate. For the PTSD the anger, night terrors, and uncontrollable actions were outrageous to say the least. This program has saved my life and got it back on track. It’s given me purpose and taught me how to express my emotions and thoughts on paper instead of lashing out at the world. My vocabulary has increased a great deal. This program has also gotten me out of the house and made me socialize again. My short term memory is slowly remembering more, thru playing the guitar and having to remember chords. In just 6 months this program has done more for me and my healing than the 4 years of therapy I have been going to. Everything has lessened or gone away, for example my night terrors have gone and this is without medication, which is saying a lot. This program has given me hope for the first time in a long, long time and a reason to keep going. Music can change the world and is changing me for the better.”

Kevin Bennett and Fred Smith are now joining the movement begun by Dustin Welch.  Dustin writes: Soldier Songs and Voices is an organization I volunteer for twice a week. We give music and songwriting lessons to Armed Forces Veterans free of charge, and even provide them with guitars as a vital means of self-expression and psychological healing. The stuff coming out of these sessions is remarkable.

Here the program is known as Soldier Songs and Voices – Australia.  For workshop dates (for all veterans, workshop maximum 12) see http://www.soldiersongs.net.au/#!workshop or call 0439 227 658.
And for further background and contact information: 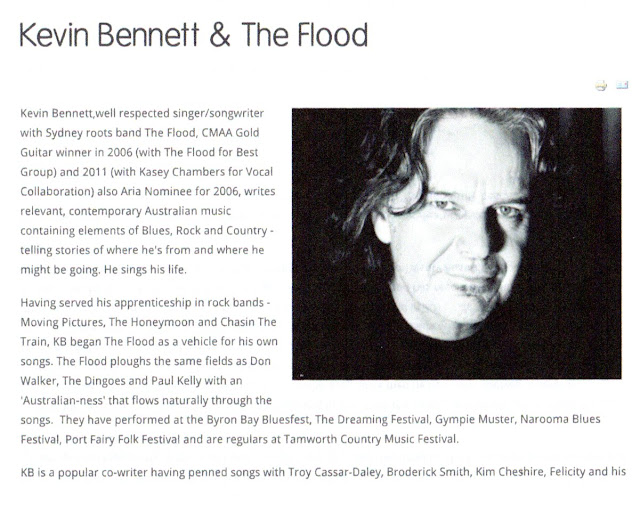 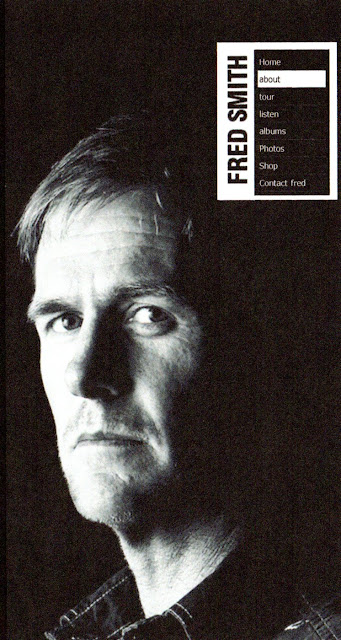