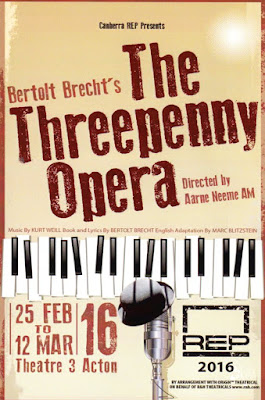 With the band up on scaffolding, my first thought was to remember my own production, 40 years ago.  I had to have Union inspection and approval for scaffolding over 4 ft up, for workplace safety reasons.  I’m not sure, though, that Brecht was a strict Union man when he ran the Berliner Ensemble, set up as a state supported theatre in East Germany from 1949.

On the day of the Uprising of 1953, he wrote to the Secretary of the Socialist Unity Party (effectively the government) “At this moment I must assure you of my allegiance...” and, I believe, at first refused to allow his actors to participate.  But he also wrote the following poem soon afterwards (although it was not published until 1959, after his death):

After the uprising of the 17th June
The Secretary of the Writers Union
Had leaflets distributed in the Stalinalee
Stating that the people
Had forfeited the confidence of the government
And could win it back only
By redoubled efforts.  Would it not be easier
In that case for the government
To dissolve the people
And elect another?

He died only three years later in 1956, but the irony of his 1928 The Threepenny Opera lived on – even if he now had had to apply it to himself.  Canberra Rep’s production effectively brought out the theme, especially by directing the last lines of Act Two’s concluding song, ‘What Keeps a Man Alive?’, at us in the audience:

You gentlemen, don’t you be taken in
What keeps a man alive is hate and sin.

The stage set was consistent with Brecht’s approach at the Berliner Ensemble, with not only the band and the technical equipment all visible, but even with no ‘wings’ and the door open to the backstage area for actors to come on.  However, also in keeping with the original production’s band, the Threepenny Pits and the singers have not used any amplification.

Despite the purity of Rep's intention, the original band was in the pit, not above and behind the actors, and the action was on a conventional ornate proscenium stage – though with drops on each side showing the words of the songs (I believe, though I have not been able to firmly establish this).  Unfortunately the acoustics of Theatre 3 in its ‘Brechtian’ mode, often made it difficult to get a good balance between the singer’s voice and the band – even though Ewan’s program notes specifically mention ‘the judicious use of mutes’.

So, though all singers were excellent in voice, for me, seated at one end of a row, only four succeeded in providing the clarity and articulation necessary for the songs to make their full impact: Tim Sekuless as the villain/hero Macheath; Peter Dark as entrepreneurial provider of beggars to the streets of London, Mr Peacham; Helen McFarlane as chief prostitute Jenny Diver; and especially Sian Harrington as Lucy Brown, Polly Peachum’s rival for Macheath’s attentions (and also daughter of Macheath’s old army mate, now Police Commissioner, Tiger Brown).  Jim Adamik as Tiger won the day in another way, clearly having learnt some amazing ‘silly walks’ from John Cleese.

When jazz trumpet virtuoso Satchmo – Louis Armstrong – made ‘Mack the Knife’ (performed very ably here by Dick Goldberg as the Street Singer / Narrator) into a popular entertainment, I felt it was sacrilege.  As Aarne Neeme wrote in his Director’s Notes, Brecht’s underlying idea [is]: ‘If criminals are bourgeois, are bourgeois criminals?”  Anne Senior’s costuming of Macheath as the city dandy, and Neeme’s directing of Tim Sekuless’ acting makes the point that he is outwardly indistinguishable from a middle-class bourgeois, but his knife – though well hidden – is quite likely to be put to violent use.  The seriousness – even horror – of Mack the Knife is lost in Louis Armstrong’s purely entertaining portrayal.  Canberra Rep ‘gets it’ right.

Neeme also writes that Elisabeth Hauptmann was the person who translated the original The Beggars Opera (by John Gay) into German and probably wrote most of the dialogue.  ‘At the core of The Threepenny Opera is the opposition of Hauptmann’s women, tired of being kicked around by ruthless and egocentric men’ he writes.  ‘...it is the women, who actually control events’.  And I guess it is the ultimate irony that it is a woman – the newly crowned Queen Victoria – who pardons and rewards the murderer/ standover man Macheath – in order to give the opera a conventional ‘happy ending’.

All of this works in Canberra Rep’s production, through the relationships established between  Tina Robinson’s Polly Peachum, with her mother, played fiercely by Sarahlouise Owens, her rival Lucy Brown (Sian Harrington) and Jenny Diver (Helen McFarlane).  These are strong women, despite the awful domineering Mr Peachum (Peter Dark).

So, it was rather disappointing to see that the auditorium was nowhere near full, at this point in the run, especially when compared with the effect in 1928:

The Threepenny Opera in Europe 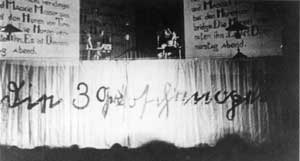 Notes: One of the greatest rags-to-riches stories in the history of theater. After a disastrous rehearsal period, everyone involved thought the show was doomed. Producer Ernst Josef Aufricht had already started trying to find another play for his theater the day before Threepenny opened. But the audiences couldn't get enough, and within a week the show was the talk of Berlin. Count Harry Kessler noted, "It is the show of the season, always sold out." Threepenny-fever swept Berlin-one entrepreneur went so far as to open a club (the Dreigroschenkeller) named after the show-Germany, and Europe. The show saw an amazing 130 productions on the Continent over the next four years.

Maybe, despite the politics and Royal Commissions – and terrorism – going on all around us, we Canberrans are just a little too complacent.