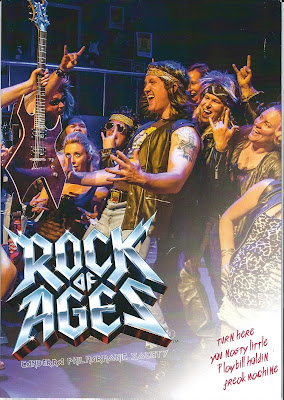 Canberra Philharmonic’s ‘Rock of Ages’ works well because it doesn’t take itself seriously.  A narrator constantly reminds the audience directly that we’re watching a musical and he even wishes it had a better plot and characters.  None of it matters – it’s just an excuse to hang together a lot of classic rock songs from the 1980s.  The musical features songs from Styx, Journey, Bon Jovi, Pat Benatar, Twisted Sister, Steve Perry, Poison and Europe.

The director, Jim McMullen’s production reflects the period very well.  The nicely detailed composite set, co-designed by Jim and Ian Croker, has plenty of playing areas and, with the stunning lighting and sound design by Liam Ashton, Eclipse Lighting and Sound, an overall rock concert atmosphere is created.  The eye-catching costumes by Vanessa de Jager show a good knowledge of the period.

Will Huang gives an extraordinary performance as the nasty Stacee Jaxx, acting and singing the role brilliantly.  Classically trained singer, Dave Smith, shows the versatility of his voice in an appealing performance as one of the few ‘nice’ characters, Drew.  Emma McCormack sings attractively and doesn’t shy away from playing a very real Sherrie.  Tim Stiles gives a suitably ratty and enjoyable performance as the Narrator.  Strong support is given by Ian Croker, Berin Denham, Anita Davenport, Hayden Crosweller, Shell Tully, Pat Gallagher and Andrew Haese.

Musical director, Max Gambale, has done an excellent job with the cast and the band and Rachel Thornton’s choreography shows a strong knowledge of 1980s dance while interpreting it in theatrical terms.

This review was first published in the Canberra City News digital edition 4 March.  Len Power's reviews can also be heard on Artsound FM 92.7 'Artcetera' program from 9.00am Saturdays.