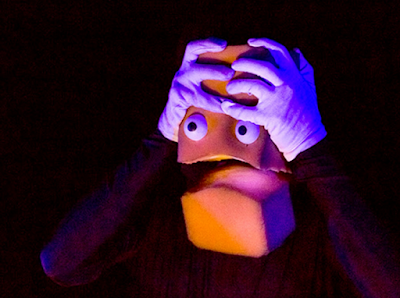 The Last Great Hunt production
The Street Theatre to 22 June

The creators of ‘Bruce’, Australians Wyatt Nixon-Lloyd and Tim Watts, have had considerable success with their shows at the Edinburgh Fringe and internationally.  ‘Bruce’ is being performed here in Canberra by Daniel Buckle and Nick Pages-Oliver.

Combining the skills of puppetry and mime and doing them very well requires a lot of talent as well as training.

‘Bruce’ is described in the company’s publicity as a ‘low-fi puppetry spectacular’, apparently referring to the fact that they do a lot with very little.  Our hero Bruce is a hand puppet made from a rectangular piece of sponge with eyes and a mouth.

Both performers are dressed from head to toe in black and, while one performer works the face, the other, wearing white gloves, does the hand movements.  Working at high speed while combining these two elements, the performers show enormous skill and dexterity in bringing this character to life.  In addition, there is top-notch voice work by the performers for Bruce and the various other characters encountered along the way.

On the darkened stage, only three lights on stands grouped around the performers are used.  The lighting and sound operator, identified at the end of the show as Chris, did a remarkable job with the huge number of split second light cues.

It was difficult to keep track of the story which seemed to cover a whole lot of movie clichés from film noir to modern space blockbusters.  Bruce, our hero, appeared to work his way through the ups and down of life encountering love, a baby, a villain space and time travel.

You can just enjoy the skilful physical and vocal performances mindlessly but the show would be stronger with a little less speed and more story clarity and character involvement.  Kids would enjoy the show but there is occasional strong language in it, which might put some parents off.

There was no program for the show so background information about the hard-working performers or the creative and technical team can’t be provided.

Posted by Canberra Critics Circle at 8:14 AM