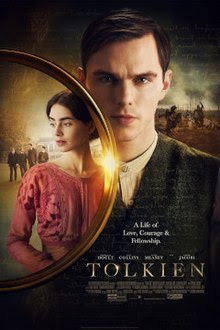 In this new biopic about a major creative talent, actor Nicholas Hoult’s arched eyebrows and bowed mouth suggest something impish, if not elfin, about J. R. R. Tolkien. He doesn’t look one bit like Tolkien, but the popular actor has been versatile, cast in action franchises like X Men and Mad Max, and in indies like The Favourite where he lit up the screen.

Hoult would have been well suited to a part in the fabulous series that Peter Jackson created of Tolkien’s novel, Lord of the Rings. Perhaps he could make it work.

Author, poet and scholar, Tolkien is said to have single-handedly revived the fantasy genre, with a self-contained  world of myth and legend, furthermore. His lifelong career in academe may not have offered exciting material for cinema but the books he wrote sure did, most specially his imagined universe of hobbits, elves and orcs et al, complete with language.

His creative vision took millions of readers with him. Completed in 1949, LOTR, the book, has become one of the highest selling novels of all time.
Where did this imagined universe come from? It's the obvious question that filmgoers will take with them to Tolkien.


Early in his formative years, Tolkien is played by Harry Gilby. Ronald, as Tolkien was known, and his younger brother, became orphans at a young age, but their mother’s mentor, Father Francis (Colm Meaney) became their guardian ensuring they had a good education, continued their affiliation with Catholicism and found a new home for them in a Birmingham boarding house.


Although the influence of his mother, who had adored myths and legends was over, Ronald’s new school paved the way for friendships with other creative types. Tolkien and a clique of like-minded friends, aspiring artistic personalities, would meet to share their work at their Tea Club Barrovian Society.

Around the same time, a friendship with another boarder, also orphaned, began to blossom. Edith Bratt is beautifully played by Lily Collins.


Like many of his generation, he experienced World War I. Though he survived, sent home with trench fever, he lost two of his closest friends.

Tolkien opens at the Battle of the Somme, in the mud and carnage and pitiless grind of trench warfare. These are powerful combat sequences and no doubt the horror of war contributed to the imaginative vision of LOTR, but we remain curious.

The lives of other writers and artists explored on screen recently may have had more filmic potential to begin with, but a dearth of strange behaviour or drunken binges, doesn’t excuse Tolkien from not trying harder to get to grips with what made Tolkien tick. A professor of philology and Anglo-Saxon, an academic over thirty years, but J. R. R. Tolkien had a vivid, let’s call it wild, imagination, a rich inner life. Just where did The Hobbit and LOTR come from?

Problem is that the screenplay that Finnish director Dome Karukoski had to work with is short on insight and imagination.  Indeed, Nicholas Hoult’s character comes across as more romantic lead than great writer of high fantasy.

This cautious and respectful biopic, leaves us needing to know more about the pipe-smoking, avuncular looking man who unleashed his imagination and inspired generations of fantasy writers.

Jane's reviews are also published at her blog, the Film Critics Circle of Australia, and broadcast on ArtSound FM 92.7 MHz
Posted by Canberra Critics Circle at 1:02 PM