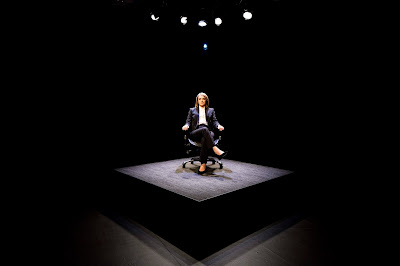 A good lawyer will tell you not to go to court unless you have to: sometimes, it’s not the place to find justice.

In Prima Facie, the court is reduced to a solitary, throne-like office chair. This is the witness stand, the crucible of the courtroom.

At the start of the play, shark-like defence lawyer Tess circles this chair as she dismantles the testimony of a witness. But before the play is over, Tess will be the one in the chair, facing the ruthless probing of an equally cunning barrister.

This ripped-from-the-headlines play by Susie Miller is a brief against how our court system handles rape cases. In rape cases, the victim is often the one on trial, with their character and motives scrutinised under cross examination.

As Miller says in her playwright’s note, the justice system is based on the idea of ‘innocent until proven guilty’, but she always felt ‘its application in sexual assault cases served to undermine rather than to uphold any real legal fairness.’

Sheridan Harbridge is animated as Tess, oozing hunger and victory. Harbridge makes bold, disarming choices, finding the character’s frantic humour. She responds to her sexual assault with pain and horror, but also an affronted disbelief.

Harbridge also makes Tess’ world of lawyers and police and family tangible by slipping into other characters for flickering moments, demonstrating a cartoonist’s eye for the ridiculous detail.

The steady hand of director Lee Lewis tames this potential chaos, smoothing the actor’s wild impulses to create a robust but believable character.

As a barrister who has successfully defended rape cases, nobody could be better equipped than Tess for the witness stand. The brilliance of Prima Facie is that it shows how even Tess struggles. If it’s hard for Tess, what hope do other rape victims have?

Prima Facie combines a lawyer’s logic and an artist’s passion to create a manifesto for change that is vivid, compelling and human. The play supplies no answers, but challenges us to go out there and find some.
Posted by Canberra Critics Circle at 11:37 PM