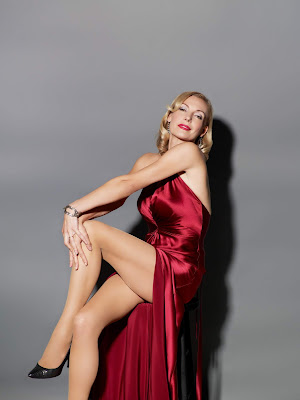 In 1988, the French press was hailing Ute Lemper as “the new Marlene” Feeling embarrasesd, Ute wrote to Marlene Dietrich to apologize. To her surprise, she received a letter from  the eighty seven year old legendary star, thanking Lemper for the sweet note and inviting her to call her. Rendezvous with Marlene” is Lemper’s account of what turned out to be a three hour phone conversation with Dietrich.

Music fills the air as Lemper sidles from the shadows into the light to open Rendezvous with Marlene with her seductive rendition of Dietrich’s classic Illusions,. In the husky, sensual sound of Dietrich’s signature voice Lemper lures the large audience in Adelaide’s Thebarton Theatre into Dietrich’s Paris apartment. For three hours, Lemper recounts the conversation, assuming Dietrich’s  persona with the throaty, aging voice as the older Marlene, or adopting an uncanny likeness in costume and posture to the iconic Blue Angel. With the ease of a consummate performer, Lemper moves between the Marlene at the end of the line and the young Lemper, starting out on her career, and already making a name for herself as the new Marlene. 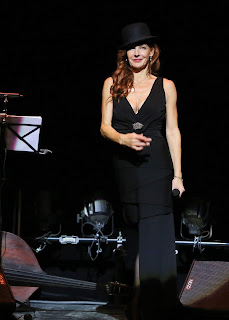 The narrative thread weaves through the remarkable life of Dietrich, a glossary of famous encounters with the artistic glitterati of her time ,of insatiable sexual adventures with leading men and women , of wartime service, entertaining the troops  and tireless activism for worthy causes that saw her branded a traitor in her homeland. The past becomes the temple of her dreams; the present the tomb of her past Lemper’s Dietrich is an old woman, alone and reclusive in an apartment across from the apartment where her true love Jean lived. Lemper’s version of Jacques Brel’s  Ne me quitte pas is a moving reminder of lost love and faded dreams. The flamboyant femme fatale who lit up the shimmering screen has become the faded, neglected dying star, estranged from her daughter and living out her lonely years in self-imposed solitude. Lemper becomes her ardent biographer in story and song.

For it is Lemper who is the star of Rendezvous with Marlene, drawing on an unique experience to discover the mystery and the magic of Dietrich’s exceptional life and complex personality.  Throughout the show, Lemper exhibits her own exceptional talent and dazzling stage presence in the songs that will always be identified with Marlene Dietrich such as Friedrich Hollaender’s Falling in Love Again. Now a shining star herself, Lemper makes Marlene’s songs her own. Her remarkable voice and phenomenal range revive Marlene’s command of the cabaret gebre with Fritz Loesser and Friedrich Hollaemder’s Boys in the Backroom. The spectre of war looms in the sombre melody of Norbert Schultze’s iconic Lili Marlene.

Dietrich’s versatility is evident in her long collaboration with Burt Bacharach with songs such as What The World Needs Now while true regret and longing for a glorious age echoes through the soulful melodies of Bob Dylan’s How Many Roads?” and Pete Seeger’s mournful Where Have All The Flowers Gone?

Although the advertised performance time of Rendezvous with Marlene of two hours  ran an hour overtime on the uncomfortable seats on the flat floor of the vast proscenium stage of the Thebarton Theatre, and suffered from the lack of judicious editing of the conversation, aficionados of Marlene Dietrich and Ute Lemper can revel in the rare opportunity to indulge in the sheer pleasure of spending an evening in the company of two iconic chanteuses, the enigmatic Marlene and the phenomenal Ute Lemper. Unfortunately I have no programme to acknowledge the excellent musicians on piano, saxophone, violin and drums. Tonight was a rendezvous with Marlene, Ute and her musicians to remember.

Posted by Canberra Critics Circle at 12:32 AM