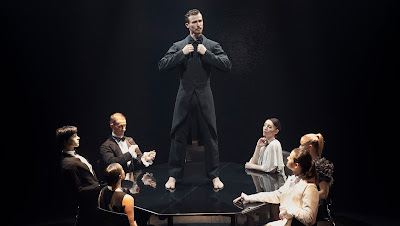 Natalie Weir originally created this work for Expressions Dance Company in 2015 under the title “The Host”. As she explains in her program notes, one of the meanings for a “host” is “an animal or plant on which parasites live”. Now reworked for the current EDC ensemble, under the title “The Dinner Party” that description still perfectly describes the activities depicted in this work.

All the action takes place during an elegant dinner party lauded over by the host (Jake McLarnon), and his sophisticated wife and hostess (Lizzie Vilmanis), both glamorously attired in black. The four guests include the host’s friend and rival (Bernard Knauer), a young male wannabe (Jag Popham), the host’s lover (Isabella Hood) and a young insecure party girl (Josephine Weise).

During the course of the evening each competes for attention. Relationships and rivalries are exposed in a series of fascinatingly complex sequences. Weir’s  lyrical acrobatic choreography makes huge demands on her dancer’s, though you would hardly guess that from the apparent ease with which each of the dancer’s execute it. With the personality of each of the characters so clearly delineated, the ebb and flow of the relationships becomes endlessly fascinating. The dancing throughout is exquisite and assured, with each of the dancers obviously relishing the opportunity to lose themselves in their distinctive characterizations.

Tall and elegant, Jake McLarnon dominates proceedings as the host, manipulating his guests physically as well as psychologically. Bernard Knauer is a formidable rival and the trio in which both attempt to seduce the party girl is mesmerizing.  Lizzie Vilmanis oozes sophistication and elegance as the hostess, at first irritated by the presence of the host’s lover, Isabella Hood, but in a later in a conciliatory duet apparently accepting of the arrangement. Isabella Hood is captivating as the flirtatious party girl clearly out of her depth, while Jag Popham makes a strong impression as the young novice prepared to sacrifice his integrity to climb the corporate ladder.

“The Dinner Party” remains another masterwork from Natalie Weir and a perfect showcase for the prodigious talents of the current company of Expressions Dance Company dancers. It’s a pity therefore that most of the audience had no idea who they were watching. Apart from six large individual portraits displayed in the foyer, in which the dancers were not identified, there was no program material available. Regretably, there’s a growing practice for companies to dispense with printed programs, relying on audience members to download them off the internet. Does anybody?

This review first published in the digital edition of CITY NEWS on 22nd June 2019.