Let’s face it. Fat Pride is A OK. That is unless you want to make it in a musical. “How many leading roles for fat ladies in a musical can you name?”, singer/comediennes Maeve Marsden and Libby Wood ask the audience. A  very long pause. Rebel Wilson in Hairspray? Queen Latifa in Chicago? Not in lead roles though! And those who are fat are very often the villains or the butt of humour. So what’s the solution? Take a string of popular musicals and change the lyrics to suit the size of  the leading lady? However, “I once knew a girl called Sue” doesn’t quite have the same ring to it as Wood caresses an older member of the audience.
Referencing one show after another from South Pacific to Chicago and from My Fair lady to Calamity Jane, from Rodgers and Hammerstein to Sondheim, Wood and Marsden try as hard as they may to make fat fit into the thin. They change the lyrics to hit on body parts in a clever spoof on Cell Block Tango. Wood binds gasping Marsden into a corset with breathtaking effect. Through it all they belt out the evergreen tunes  with full bodied force. These are two ladies with a ton of talent, but no show to show it. Except their own with musical director Benjamin Kiehne at the piano and Shondella Pratt o tke them through One Singular Sensation in hilariously hugging cat outfits. It’s a routine to keep as a memory. 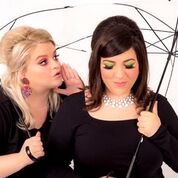 At one point Wood preempts the critic when she comments on the fact that they never get through  number, and I tend to agree. There is too much talent here to throw away on a snippet and if fat people want to take on those leading roles, then it’s time to show what you’ve got. The danger of a show that uses song to serve the message is that the audience is left wanting the whole morsel, and I felt as though I had been offered a small portion of show tunes when I didn't want it to be over until the fat ladies sing the entire number.

There’s much more to this show though than a big lady’s lament. “We need a revolution!” Marden says. The stereotypical producer, talent agent, is still the one calling the shots and they want the image that becomes the norm. What Wood and Marsden show in Fat Musicals; A Body of Work is that they’ve got the talent and the chutzpah to succeed in a popular musical like Rent or Wicked, and not just be forced to have to create their own , which, if anything in this cabaret act is to go by, doesn’t have much of a chance. They may have to have a dream ballet or a love interest and stock musical characters, but at least the ladies can be any size they choose.
And if there was any doubt, Wood and Marsden finish this funny, self effacing spoof with a classy Chorus Line finale that reminds me of Cassie’s lyrics “Give me the chance to come through.” Let the revolution come!
Posted by Canberra Critics Circle at 11:46 AM