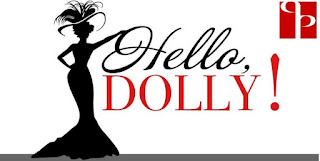 
‘Hello, Dolly!’ is one of the most successful musicals ever produced.  Opening on Broadway in 1964, this musical version of the play, ‘The Matchmaker’, by Thornton Wilder had an initial run of over 2,800 performances.  The delightful musical score by Jerry Herman contains one well-known song after another.

The story involves a wily matchmaker at the end of the 19th century in New York City who decides to make a match for herself with stingy and irritable hay and feed merchant, Horace Vandergelder, of Yonkers, New York.

The huge role of Dolly Levi, the matchmaker, is played by Janelle McMenamin.  She sings the role strongly and appealingly but opts for a low key and more realistic performance in the role.  It’s an interesting choice but the role was written for a charismatic star performer and it really needs stronger and more eccentric playing to be fully satisfying.

Tony Falla is terrific as Horace Vandergelder, singing and playing the irascibility of the character with a fine sense of comedy.  Will Collett gave a great performance as the innocent Cornelius Hackl.  He has a good singing voice and stage presence.  Demi Smith played the widow Irene Molloy with great sensitivity as well as fun.  Her singing of ‘Ribbons Down My Back’ was especially fine.

Max McMillan as Barnaby Tucker excelled with his physical comedy abilities and sang very well too.  Madeline Calder, in her Canberra theatre debut, was a standout in the comic role of the snivelling Ermengarde.  She also showed that she is a fine dancer.

Emily Pogson was very appealing and effective in her role of Minnie Fay as was Aaron Sims as Ambrose Kemper.  Judith Colquhoun gave a skilful and very funny performance in the small role of Ernestina Money.

Costumes by Janetta McRae were nicely in period and very colourful.  Set pieces by Thomson Quan Wing were simple but effective, especially the transition from the outside to the inside of the hat shop.  It was disappointing to see some scenes played on a bare stage with only black curtains.

Musical director, Jenna Hinton, obtained very attractive singing performances by all cast members.  The fine harmony singing by the chorus was especially notable.  The orchestra on opening night had a few wobbly moments but was otherwise fine.  Sound balance between orchestra and performers was just right as was the choreography by Belinda Hassall.

Queanbeyan Players and director, Michael Moore, have given us a very entertaining, well-sung and colourful production of this much-loved and famous musical.
Photo: Canberra Times
This review was first published in the Canberra City News digital edition of 1 June 2019

Posted by Canberra Critics Circle at 9:45 AM