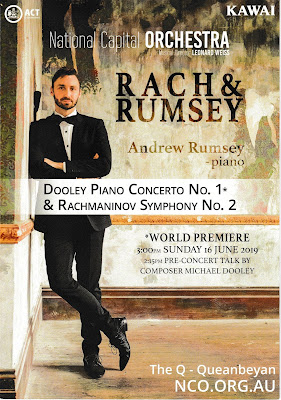 You could easily be mistaken for thinking that the program cover photo for the latest National Capital Orchestra concert was an advertisement for the next James Bond movie.

A brand new handcrafted Shigeru Kawai Concert Grand Piano was provided by Kawai for this concert.  Only twelve of these instruments are made each year.

According to the program notes, Andrew Rumsey requested an acknowledgement in Dooley’s composition of the piano concertos by Rachmaninov and Saint-Saёns.  Dooley stated that the piece is a representation of the spiritual concepts of grace and truth.

It’s a very accessible work with attractively wistful and romantic melodies.  The second movement was especially enjoyable.  Written in commemoration of Dooley’s parents, both of whom influenced his love of music, it’s beautifully composed and quite moving.  The final movement is highly spirited with a notable brightness and feeling of optimism. 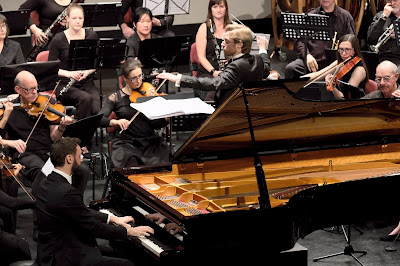 The playing by Andrew Rumsey was highly accomplished and very enjoyable.  The orchestra, under the baton of Leonard Weiss, also gave a strong performance, especially the energetic final movement.  The performers and the composer, who was in the audience, were given a standing ovation at the conclusion.

It was followed by an excellent encore solo by Rumsey which displayed the high quality of the piano as well.

After interval, the orchestra presented Rachmaninov’s Symphony No. 2.  This hour long work is quite a challenge and the National Capital Orchestra gave it a fine performance filled with colour, romance and energy.  The third movement adagio was played with great sensitivity and the final movement was especially exciting and well-played.