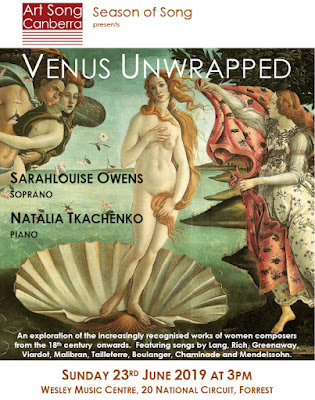 Music history is dominated by male composers – Beethoven, Wagner, Mozart and so on.  It was rare for women to have the opportunity to publish music they had composed right up to the 20th Century.  In her concert, Sarahlouise Owens celebrates some of those women who managed the seemingly impossible.  It was an education and a delight from start to finish.

Soprano, Sarahlouise Owens, has returned to Canberra after an extensive career in Europe.  She is a graduate of the ANU School of Music and Royal Northern College of Music Manchester.  She is much in demand for performances in Canberra.

Accompanist on piano, Natalia Tkachenko, graduated with honours from the Moscow State Institute Of Music.  Since arriving in Canberra in 2003, she has performed as accompanist for the ANU School of Music and many major artists.  She has also been recognized for her outstanding work as a piano teacher.

The pair presented a large and wide-ranging program of songs by female composers from the 18th through to the 21st Century.  There were some familiar names such as the Boulanger sisters - Lili and Nadia, Cécile Chaminade, Pauline Viardot, Clara Schumann and Canberra’s Sally Greenaway.  The wealth of fine music presented of the lesser known composers was astonishing.

Sarahlouise Owens was in fine voice right from the beginning with a rousing performance of ‘The Bandits’ by Maria Malibran.  She has a voice of great power and beauty and an ability to provide a depth of character to a song as well.  Amongst the highlights of the first half of the program were a finely controlled performance of ‘The Idea’ by Chaminade, a bright and joyful ‘Morning Serenade’ by Fanny Mendelssohn Hensel, a richly soothing ‘American Lullaby’ by Gladys Rich and an intensely dramatic ‘The Knife’ by Nadia Boulanger.

After interval, she gave a fine performance of a group of songs by Clara Schumann.  ‘If You Love Beauty’ was the absolute highlight of the concert, sung to perfection.  It was closely followed by a haunting ‘Lorelei’.  Equally at home with modern works, she gave a heart-felt performance of Sally Greenaway’s mood piece, ‘Look To This Day’.  The concert concluded with an amusing performance of ‘There Are Fairies At The Bottom Of Our Garden’ by Liza Lehmann.

The accompaniment by Natalia Tkachenko was excellent throughout.  Both women deserved and received a huge round of applause at the end of this memorable Art Song Canberra concert.

Len Power’s reviews are also broadcast on the Artsound FM 92.7 ‘In the Foyer’ program on Mondays and Wednesdays at 3.30pm.
Posted by Canberra Critics Circle at 10:44 AM