Dami Im  My Life In Songs.

My heart beats to the sound of Dami Im. Her voice  soars through the air, a titanic force of song from the soft jazz of Summertime to the Country and Western twang of Jolene and the triumphant crescendo  of her Eurovision performance of Sound of Silence. What an extraordinary talent! What a compassionate and genuine human being! From her entrancing opening rendition of Hero  supported by her backing band under the musical direction of Michael (no surname offered)  Dami Im had the audience soaring on the windS of her voice.
In a World Premiere and an Adelaide Exclusive, Artistic Director of the Adelaide cabaret Festival Julia Zemiro invited Dami Im to put together a show comprising hit songs of her repertoire with some surprises, intertwined with the story of her life from a Korean born five year old to the winner of X Factor and the  second place getter in the 2013 Eurovision Contest. 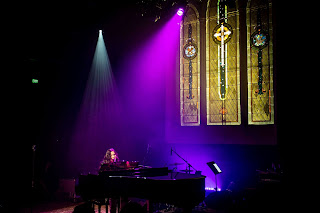 What ensues is a fascinating account of her life as a Korean born immigrant to Brisbane, her confusing early non English speaking schooldays and her difficult search for her buddy Karen in the schoolyard (After all, they all looked the same!) She talks about her opera singer mother’s desire for her to become a classical pianist after she commences lessons at the age of five and her decision to become a singer and her eventual enrolment in a Master of Jazz Studies course to learn about the voice. Destiny’s decisions guide her to a shining career as a pop singer, in demand by a Japanese producer who regards her as a combination of Lady Gaga and Bjork. Fame follows, cloaked in the artificial contrivances of image and marketing. Through it all, and through Dami Im – My Life in Songs we are enchanted by her astonishing piano playing, her vast and compelling vocal range and dynamic control and a gentle humanity that encompasses compassion and kindness. It is with her original songs that Im really comes into her own and the real person emerges from the bright light of fame.


Little Johnny  is inspired by a young Solomon Islander who expressed joy and happiness in a world of poverty that eventually forced his father to leave the island in search of a better life. It has inspired Im and husband Noah to establish a Music Academy for poor children and open the pathway to an enriched life.
For Dami Im, Korean immigrant child, classical pianist, pop icon and humanitarian, in the lyrics of Prince’s signature song, Purple Rain, her successes have led her to reach out for something new, and the audience leaps to their feet in a resounding ovation to her thrilling rendition of Purple Rain. Her Dami Army has swelled with the sheer joy of sharing an hour of her life in songs.