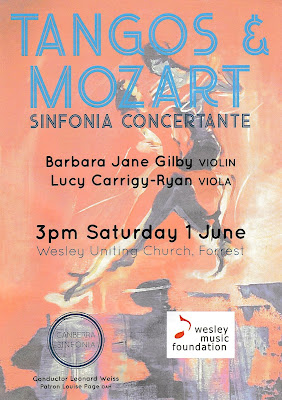 Canberra Sinfonia under the baton of Leonard Weiss presented a program of contrasts with their latest concert at the Wesley Uniting Church.

Subtitled ‘A Splendour Of Tangos’, the first half of the program focussed on this wonderfully sensual South American music.

‘Tanguera’ was originally composed around 1955 but the Sinfonia played the world premiere of an arrangement by Mariana Rivaya.  The combination of strings and French horns was particularly enjoyable in this well-played, passionate work.

Next, two older tangos – ‘El Choclo’ and La Cumparsita’ were presented.  Both very romantic and colourful, they were played with great accuracy and a sense of fun.  When people think of tango music, the melody of ‘La Cumparsita’ usually comes to mind as it has become a cliché over the years.  It was especially interesting to hear the whole work played as originally composed.

Two well-known works by Astor Piazzolla, who influenced the Tango Nuevo movement, completed the tango set.  ‘Milongo del Ángel’ in an arrangement by Canberra’s Dan Walker, is a dream-like work filled with romance and the performance was sublime.  ‘Libertango’ was edgy, passionate and played with great feeling.

Composed in 1779, this work is in three movements.  The first movement was given an enjoyably colourful and energetic performance.  The violin and viola solo passages by the two soloists towards the end of the movement were very well-played.

The andante second movement was most enjoyable, sensitively played by the soloists and the whole orchestra.  The bright and exciting finale was also well-played and brought this enjoyable concert to a satisfying close.