Two plays performed in repertory, ‘The Laramie Project’ and ‘The Laramie Project: Ten Years Later’, focus on the 1998 murder of a gay student, Matthew Shepard, in the town of Laramie Wyoming.  A particularly vicious murder by two young men who hated gays, the crime brought attention to the lack of hate crime laws in various US states including Wyoming.

Tectonic Theatre Company members conducted hundreds of interviews in Laramie subsequent to the murder and returned ten years later to repeat the process.  The plays, fashioned from the information obtained, give a fascinating and disturbing insight into the minds of the members of a tight-knit community.  It causes us to question attitudes and values universally.  An example of verbatim theatre, eight actors portray more than sixty characters who speak in their own words as recorded in the interviews.

The first play covers the murder, the trial and the interview process by the Tectonic Theatre Company members. It was very strong in its message but its length and too much overstatement caused emotional involvement to flag eventually.  The second play presents a disturbing picture of townspeople ten years after the murders trying to rewrite history.  ‘Ten years of change, no progress’ is how one character bleakly sums it up.  This play is shorter and doesn’t try as obviously to engage your emotions and is much more effective as a result. 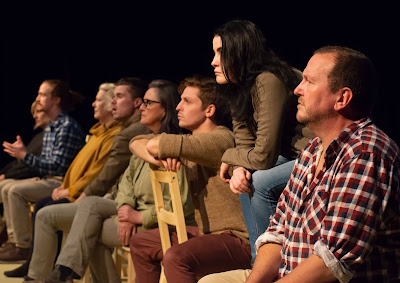 The plays are finely directed by Chris Baldock who is also one of the acting ensemble.  With a multitude of characters talking directly to the audience, the plays demand a simple, cohesive style of presentation.  Baldock achieves this to great effect with a bare stage and changing patterns of chairs.

The performances of the eight cast members are flawless.  They are Chris Baldock, Andrea Close, Michael Cooper, Joel Horwood, Hayden Splitt, Liz St Clair Long, Meaghan Stewart and Karen Vickery.  All present fine, believable characterisations, many of them brief, with believable American accents.  The opportunity to see these powerful performers working together in this memorable production is not to be missed.

Len Power’s reviews are also broadcast on the Artsound FM 92.7 ‘In the Foyer’ program on Mondays and Wednesdays at 3.30pm.
Posted by Canberra Critics Circle at 9:21 AM