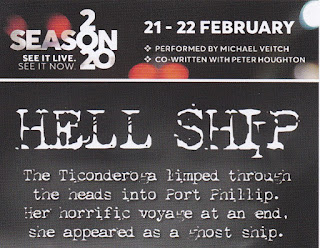 Hell Ship  is both entertaining and informative.  Researching one’s own family history and presenting something significant, as Michael Veitch has done, adds to our understanding of Australian history.  The story of Michael’s great-great-grandfather turns out to be highly relevant today.

In earlier times, too, there was a tradition of itinerant solo performers travelling the outback which still continues to entertain grey nomads in caravan parks around the country today: storytelling, poetry and bush songs are the usual fare in my experience.  But Hell Ship is a different kettle of fish.  Melbourne based Chester Creative has the touring game highly organised, offering a complete show – actor, set, lighting and sound all included – to venues with the right technical equipment and experienced staff, at a price.

The two nights at The Q are well worth the money.  Veitch takes on the role of his great-great-grandfather at a point much later in his life than his arrival in Melbourne in 1852 and his marriage to Miss Morrison, the young woman who had helped him so well to cope with the ever-increasing deaths, from typhus, on board the Ticonderoga.  He is now alone, after her recent death, and needs to tell his story – to a young sick boy whose fever can now be treated with better knowledge and new medicines like Aspirin.

As the old ship’s surgeon recalls boarding the Ticonderoga in England and events through the 100 days of sail it took to reach Melbourne, he takes on the voices and characteristics of the people involved, from the government official organising the emigration, through the people with many accents from Scotland, Ireland and England whose poverty drives them to seek a new life far away, to Captain Boyle – an ethical, thoroughly authorative figure, respected by all – and to the pilot in Port Phillip Bay who has to order the ship to disembark at an isolated beach for a long quarantine period, during which many more people died.  A quarter of the ship’s 800 passengers and crew did not survive.

We never see the young boy, hidden in his iron-frame hospital bed, but we are as alternately excited and horrified as he, and as relieved as his fever cools, and James William Henry Veitch can safely leave him to his parents’ care.

And, though of course this could not have been in Michael Veitch’s mind when he first toured this show around Victoria in 2018, I could not help thinking of the cruise ship held in quarantine in Japan and the dreadful news of the spread of the new coronavirus around the world.  The past is not such a different country, after all.

Posted by Canberra Critics Circle at 11:54 AM