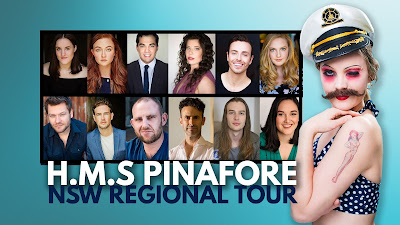 If you can’t get to Sydney for the Mardi gras, then this production of “H.M.S.Pinafore” at the Q in Queanbeyan might be your next best bet. As camp as a row of tent pegs, awash with sequins and glitter make-up, this gender-bending, hyper-theatrical, kinky re-imagining of one Gilbert and Sullivan’s best loved operettas, surprises and delights from the clever overture until the final notes of the riotous finale
. 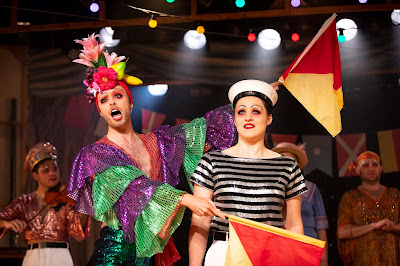 Choreographer, Ash Bee, hints at the G. & S. chorus lines with her cleverly contrived semaphore choreography performed with panache and gusto in a spectacular array of outlandish costumes, the work of designer Melanie Liertz, who is also responsible for the delightful nautical setting which pays homage to the Victorian roots of the show while providing a few surprises of its own.

Busy Musical Director, Zara Stanton, who, presumably, is also responsible for the witty orchestrations, not only accompanies the show on piano, mouth organ, piano accordion or, it seems, any instrument that comes to hand, also cleverly incorporates both the instrumental and vocal talents of the whole cast with spectacular results, even joining them herself to add heft to the choral numbers.

“H.M.S. Pinafore” contains many of Arthur Sullivan’s most delightful melodies, among them “Poor Little Buttercup”, “He is an Englishman” and “I am the Monarch of the Sea”, and in this production they are very well sung, unamplified,  with the lyrics clearly articulated to allow full appreciation of the slightly tweaked contemporary references.

Although the ensemble cast play multiple roles, Thomas Campbell almost steals the show with a very funny performance, milking every nuance provided by the cross-dressing possibilities, as well as bringing unexpected poignancy to the role of Buttercup. Tobias Cole, also surprised, singing baritone instead of his usual counter-tenor, as the elegant Capt. Corcoran.  He was well matched by Josef Ber as the irresistible “Monarch of the Sea”, Sir Joseph Porter.

Hanna Greenshields sang prettily as Josephine, paired with Billie Palin who managed an attractive baritone voice to play Ralph Rackshaw, which although complicating an already complicated story, fitted perfectly, the ethos of the production.

Sean Hall was suitably obnoxious as Dead Eye Dick, while among the ensemble of talented musicians, Dominic Lui stood out with his superb violin playing.  Bobbie Jean Henning, Elora Ledferm, Gavin Brown and Zachary Selmes all contributed individual delightful moments in a strong ensemble cast.
As this was the first production presented by Hayes Theatre Co. in the Q - and it’s a beauty -  it’s a shame that no printed programs were provided. This appears to be a growing trend with touring theatre companies, which is regrettable, as it’s disrespectful to the audience to be kept in ignorance of the names of the talented artists whose performances they are enjoying, as well as demeaning to the cast to allow their individual contributions to go unrecognised.


Images provided by the Company.

This review first published in the digital edition of City News on  16.02.20