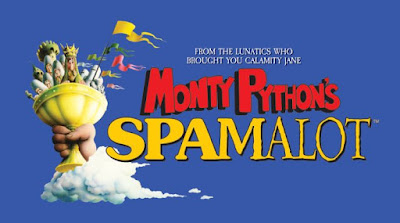 ‘Monty Python's Spamalot’ is a musical comedy adapted from the 1975 film, ‘Monty Python and the Holy Grail’, a parody of the Arthurian legend.  The original 2005 Broadway production won the Tony Award for Best Musical and ran for over 1500 performances.

You don’t have to be a Monty Python fan to enjoy this but it helps.  On opening night, the audience clearly knew and loved the set pieces from the original movie very well.

Richard Carroll’s production is a high energy romp with a talented cast of eight playing multiple roles.  The deceptively simple set of colourful painted backdrops designed by Emma Vine works very well and the multitude of colourful period and just crazy costumes are great fun, too.  The nicely atmospheric lighting design is by Katie Sfetkidis.

The music appears to be pre-recorded rather than live.  The sound levels are fine and the cast are all fine singers.  ‘Star Song’ has been given witty localised lyrics by Richard Carroll, Virginia Gay and Rob Johnson.

Cramer Cain is a handsome, stoic King Arthur.  Josie Lane pulls out all the stops as a Shirley Bassey-like Lady Of The Lake.  Marty Alix is a very funny Sir Robin and Blake Appelqvist is a riot as the aggressive Dennis from the farming collective who becomes Sir Gallahad.  He also excels as the head of the Knights of Nee.

Abe Mitchell as Sir Lancelot and Rob Johnson as Prince Herbert and other characters are also excellent.  Amy Hack wins the audience over as the almost invisible servant, Patsy, and Jane Watt as Sir Bedevere is also an inspired comedian.  Bronte MacInnes cleverly makes her presence felt as the harried Assistant Stage Manager.

A limited number of audience members are seated onstage during the show.  You do so at your peril in a show like this.  You’re not exactly safe if seated in the stalls either.

It seems to be a week of theatrical lunacy in Canberra with ‘Monty Python’s Spamalot’ hitting town at the same time as the wacky production of ‘HMS Pinafore’ over at the Q in Queanbeyan.  Both productions originated at the Hayes Theatre in Sydney.

Photos supplied by the production.
Len Power’s reviews are also broadcast on the Artsound FM 92.7 ‘In the Foyer’ program on Mondays and Wednesdays at 3.30pm.

‘Theatre of Power’, a regular podcast on Canberra’s performing arts scene with Len Power, can be heard on Spotify, ITunes and other selected platforms or at https://player.whooshkaa.com/shows/theatre-of-power.
Posted by Canberra Critics Circle at 9:48 AM