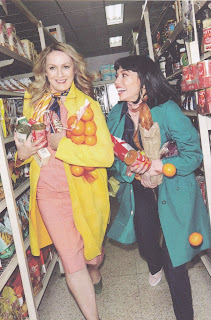 Behind the uproaringly side-splitting laughter in Marieke Hardy’s adaptation of this Italian 1970s political farce (almost certainly by Dario Fo and Franca Rame, dubbed “the person behind the political”) is a highly intelligent design and directing concept.  Sarah Giles and Charles Davis parallel the collapse of the capitalist economic system by making the stage set of a neat, just adequate but seemingly substantial housing unit, break into scattered pieces around the characters, who struggle along until the point is reached where there is nothing left to do except sing a sad song of hope.

Though Hardy writes “if all else fails, let’s just be together for a spell and hold hands and laugh at how messed up it all is”, Sarah Giles’ ending is less hopeful.  Her characters sing quietly and beautifully, but distinctly apart from each other among different bits of their shattered environment.  They have made us laugh with references to our very own daily political farce, then sing us into a blackout which is a grateful pause in the madness.  We applaud in a moment about which we can only think, this is “Sad but True!”

I suspect, from the Youtube examples I can find, that Giles and her designer Charles Davis have taken us a step further into the absurd than Fo and Rame envisaged.  Other productions seem to finish on a note of defiance, still in the neat home setting, for which audiences cheer as the last line is spoken.  We went quiet in the darkness before the absolutely justified burst of applause as the lights came up for the curtain call.

Farce, of course, relies on surprise, so there is no way – with or without pay – that I can describe what happens in this production.  You simply must go along to the prestigious Sydney Opera House to laugh at pretension and laugh at the collapse of the ordinary good order of life.  Just watch out for the caesarian breaking of the waters, the brine and the olives.

Say no more – though you may understand a few more jokes if you know Italian.

It is a terrific production – an adaptation that Fo and Rame would surely be proud of, however horrified they might be to know that we still need to face up to the same, perhaps even worse farcical state in Australia and the world today.  I remember George W. Bush ringing in the new century 20 years ago with the cry “A New World Order!”


Posted by Canberra Critics Circle at 10:06 AM