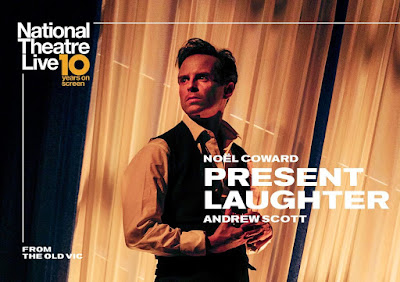 Written by Coward in 1939, it was not produced until 1942 because the Second World War began while it was in rehearsal, and the British theatres closed.  The title is drawn from a song in Shakespeare's Twelfth Night that urges "present mirth hath present laughter".

In the few days before embarking on an African tour, star actor Garry Essendine’s colourful life is in danger of spiralling out of control.  Engulfed by an escalating identity crisis as his many and various relationships compete for his attention, Garry’s few remaining days at home are a chaotic whirlwind of love, sex, panic and soul-searching.

Played out on Rob Howell’s beautifully designed art deco setting, the cast of ten expertly wring every laugh out of this entertaining play.  Watching the performances by these actors is a master class in playing this type of mannered comedy.

As the leading character, Garry Essendine, Andrew Scott is brilliant.  Playing at a feverish pitch throughout, he makes this spoilt, temperamental, self-centred actor a man of great charisma and charm, even though he’s a pain in the neck at the same time.  It’s an extraordinary performance, physically and vocally.

Sophie Thompson as Essendine’s long-suffering secretary and virtual nanny, Monica Reed, is equally impressive with a quirky yet commanding performance.  Indira Varma gives a highly sophisticated and attractive performance as ex-wife, Liz Essendine, who still makes it her mission in life to keep him on the straight and narrow.

There is fine support from the rest of the highly skilled cast including Enzo Cilenti as the handsome and very available Joe, Luke Thallen as the hysterical writer, Roland Maule, and Abdul Salis as the nervous agent, Morris Dixon.

The direction by Matthew Warchus is impressive with its depth of characterisations and believable relationships.  He has it all playing at break-neck speed with split second timing especially in the farcical second act.

Coward’s play has been altered from the original by changing the gender of certain characters.  In the original play, the seductions and affairs are strictly heterosexual.  At the time it was written, censorship laws would not have allowed for anything else.

In this production, Garry Essendine is portrayed as bisexual in his relationships.  It’s easy to see how this could feel justified by the production team.  The play originally had a working title of “Secret Sorrow” and Coward, a homosexual who never actually declared his sexual preference during his life, acknowledged that the leading character of the play, Garry Essendine, was a caricature of his real-life persona.

While this version plays beautifully and is very entertaining, it’s a concern that modern audiences will now think that this is the play as originally written by Noel Coward.  If the play is considered a classic and is still worth performing, the script should not need to be altered from the author’s original intention.