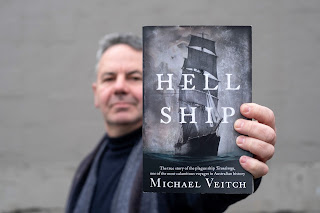 Many tales are told of the countless shipwrecks that occurred along the southern coastline of the continent and of the hundreds of lives lost at sea while searching for a better life in the new colonies. However, few would have known the story of the fateful Triconderoga, a sturdy  emigrant clipper that brought Highland emigrants across the seas to Australia in 1852.

What makes Michael Veitch’s one man show Hell Ship such an engaging, moving and powerful account of the journey is the personal resonance of his performance. On board the vessel was the ship’s young doctor, James William Henry Veitch, Michael’s great great grandfather, who, with the assistance of a Scottish nurse, Annie Morrison, desperately worked tirelessly and with scant regard for their own welfare to treat the outbreak of typhus, when it was discovered after passing the equator that one of the patients had the condition. What unfolds is a story of courage, compassion and the struggle to survive, as Veitch fills the stage with the drama of his forbear’s life.

A simple set on the Q Theatre stage captures the era and bleakness of Veitch’s tale. A young patient lies in a fever on a bed. He is being treated by a doctor, who is drawn into the drama of the voyage as typhus grips the travellers. On a crowded ship of 800 emigrants, the plague quickly spreads and by the time the Triconderoga limps into Port Phillip Bay, one hundred poor souls have been unceremoniously buried at sea. In the centre of the stage is a chair where James Veitch recounts the horrific experience as a surgeon’s mate and at the other side a large sailcloth projects images of the ocean as thunderclaps burst forth. We are instantly transported to a bygone era and the tragic decline of a mighty vessel and its human cargo.

Veitch is a fine actor, deftly changing role with voice and gesture while exuding a pacifying calm throughout the deadly drama. His pace is assured and measured with deliberately sensitive tempo.  His affinity with the story is plausible and heartfelt. What is less apparent is a surge of the shifting emotions. The performance appears deliberately low key, though not without impact. Perhaps his book would allow a greater sense of the building saga of what must have been a desperate plight. Maybe the drama would lend itself more effectively as a radio play, allowing the imagination to picture and conjure the on board horror. Alternatively, the largely forgotten tale warrants a  full length production, allowing individual stories to be developed and the romance between James and Annie to be developed until their eventual marriage.
This is of course speculation and appreciative audience members gathered at the close of the  performance to purchase Veitch’s book for a fuller account of the events upon the ill-fated clipper. Tonight’s performance was a theatrical teaser, adeptly performed by a fine actor and storyteller and an important acknowledgement of the suffering and heroism that so often took place upon the high seas during our nation’s nineteenth century maritime history.
Posted by Canberra Critics Circle at 7:36 PM